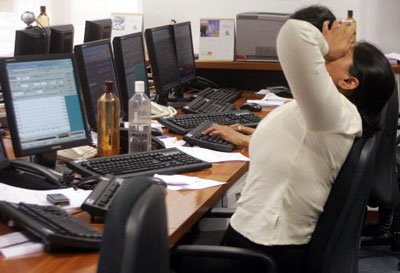 In May 2006, an Indian stock dealer copes with news that Indian share prices fell 6 percent in early trading in Mumbai.
Sebastian D'Souza/Getty Images

Day traders employ certain techniques to increase their profits. Two of the most important are leverage and selling short. We've discussed leverage several times throughout the article, but it's worth mentioning again. If you'll recall, leverage is the process of borrowing money to make more money.

Where do day traders find this money? They generally borrow it from their brokerage firms, using a special account known as a margin account. The margin account is different from a trader's cash account and requires an initial investment of at least $2,000. Once the margin account is opened, a trader can borrow up to 50 percent of the purchase price of a stock. This is also known as buying on margin.

Another borrowing strategy is selling short. A day trader who sells short borrows a security and then sells it in the hopes of repaying the loan by buying back cheaper shares later on. In this case, the trader looks for a security that is going down in price (as opposed to the more common practice of buying low and selling high). Once he identifies such a security, the trader:

Both leverage and selling short carry certain risks, and both can result in a day trader losing his assets and being asked to pay back those he borrowed. One of the biggest dangers is the margin call. A margin call may be issued when the value of a trader's margin account falls below a preset limit known as the maintenance margin. To satisfy the margin call, a trader must deposit more money into his account. If he can't do that, the broker will start selling the trader's securities until the maintenance margin is once again attained. Under most margin agreements, a firm can sell a trader's securities without waiting for him to meet the margin call. He may not even be able to control which securities are sold.

To reduce the risks associated with trading on margin, day traders use stop-losses. A stop loss order is an order to sell a security at the market price as soon as it hits a predetermined level. The advantage of a stop order is that a trader doesn't have to obsess over a stock's performance, knowing he has a measure of protection. The disadvantage is that the stop price could be triggered by a short-term fluctuation in a stock's price. Still, a stop order is an important tool for day traders, as is a "mental" stop-loss: a maximum amount that a trader is willing to lose in a day.

So do the risks of day trading outweigh the rewards? Find out in the next section.