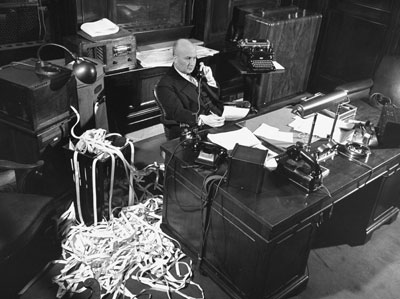 Day trading is a relatively recent phenomenon -- one made possible by several events and rulings throughout the past century or so. Let's take a look at the critical events that had an impact on the evolution of day trading.

1867: Following the invention of the telegraph, the first ticker tape was developed, making it easy to communicate information about transactions occurring on the exchange floor with brokers. Most brokers who traded at the New York Stock Exchange kept an office nearby to ensure they were getting a steady supply of tape and the most current information.

1928: At the height of one of the stock market's most notable bull markets (a market in which stocks are increasing), traders didn't have direct access to the market. They had to place orders through a broker, who used information collected off the ticker tape.

1975: The Securities and Exchange Commission (SEC) established rules that abolished fixed commissions. For the first time in 180 years, trading fees were set by market competition. Many firms, such as Charles Schwab, began allowing customers to trade stock at discounted commission rates. This marked the beginning of the discount brokerage era.

1987: Because most trades were conducted over the phone, firms buying and selling NASDAQ securities had an easy way to avoid small investors trying to call in a trade during the October stock market crash -- they simply didn't answer their phones. In response, the SEC introduced the Small Order Entry System (SOES), which gave orders of 1,000 shares or less a priority over larger orders.

1997: The dot-com craze fueled speculation in technology stocks as another notable bull market charged ahead. At the same time, Internet access was becoming widely available. Several online trading companies, such as E-Trade, launched their Web sites and helped stir the pot further with much-publicized IPOs. Suddenly, small traders had direct access to price quotes and trading activities, which leveled the playing field for everyone. Some even argued that the market favored small traders, who could take advantage of the SOES. Unfortunately, these traders also earned a tarnished reputation as SOES bandits.

1999: Day trading received more and more public attention. In testimony before Congress, Arthur Levitt, Chairman of the SEC, estimated the number of day traders to be around 7,000. His estimate of the number of investors using the Internet for brokerage services: 5 million. The negative effects of day trading also made headlines. Mark Barton went on a shooting spree in an Atlanta day trading office, convincing many people that day trading was so stressful it could drive a man to commit murder. Just two weeks after the shooting, the North American Securities Administrators Association released a report stating that seven out of 10 of day traders lose everything.

2000: The SOES was changed to eliminate the advantages for day traders, but the biggest blow came in the form of another stock market collapse. When the dot-com bubble burst, many of the day-trading opportunists, either bankrupted or frightened away, sought new careers.

2008: The lawless, frontier feeling of day trading is long gone, as are most of the get-rich-quick hopefuls. In its place are professional day traders who pursue their work with the same diligence and care as any other professional.

In the next section, we'll look at what it takes to be a day trader.