If you hate talking to strangers, make a game of it by giving yourself a number of people you must speak with in order to get a reward. Natalie Behring/Getty Images

Showing up early is a great idea, but what if you are still terrified by the prospect of introducing yourself to strangers, no matter how small the group? You might be a savvy businessperson, a creative thinker and a hard worker, but nobody will know it if you never open your mouth.

Here's a tip: Set a goal to speak to a specific number of people, and stick to it no matter what [source: Clark]. If you promise yourself that you're going to speak to at least 10 new people at a networking event, don't break your promise. You could make it more entertaining by telling yourself, "I'll meet five people wearing blue and another five carrying large purses or briefcases."

Bribe yourself with an ice cream sundae as a reward. Or bring a friend and make a bet — the one who talks to the fewest people buys dinner. By setting a goal, you have something concrete to work toward. Plus, once you reach the goal, you have a great excuse to leave! 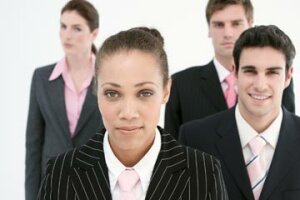 How to Advance in a Company