Browse the article Introduction to How Business Communication Icebreakers Work 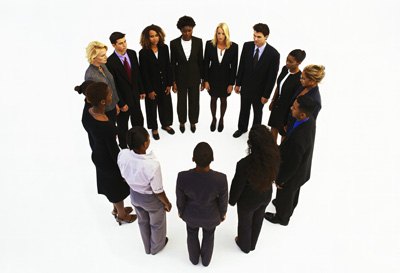 Use icebreakers in an awkward meeting to get people talking. See more pictures of corporate life.
Stockbyte/Getty Images

We've all had to suck it up and play along at one point or another. Try as we might, we can't avoid it -- the office icebreaker. At many an awkward gathering, you'll find an excited leader who insists on an activity to break the ice between strangers. And sometimes, as much as many of us hate to admit it, icebreaker activities do give us an opportunity to meet and learn about our coworkers. Ironically, if nothing else, the shared anguish of the icebreaker experience fuels camaraderie.

Icebreakers are group activities or games intended to help people get acquainted. The group could be made up of total strangers, people who are only loosely acquainted or co-workers who don't naturally socialize (or possibly don't even get along). How do businesses use icebreakers to improve communications among employees?

One theory poses that icebreakers evolved from a psychology trend in the 1960s called the Human Potential Movement [source: Tennant]. Subscribers to this movement believe that people possess hidden talents and abilities that can be best drawn out and cultivated by organized group activities and interaction with others. One of the methods used to draw out someone's talents would be to encourage assertive behavior [source: Corsini]. Icebreaker games encourage participants to take initiative and instigate interaction with others in order to help the whole group integrate.

Despite the potential emotional discomfort of an icebreaker, many experts agree that icebreaker activities are extremely useful. Knowing good icebreaker techniques can help individuals learn how to comfortably start up conversations in day-to-day interactions as well as reduce stress, and, theoretically, increase productivity in an office. In the next few pages, we'll look at some tried and true icebreakers that work for adults in a variety of situations. Although they're loosely broken into categories, many of the games listed are versatile and can be used in several kinds of environments. We'll start with the most common icebreakers, those meant for a group of strangers, on the next page. 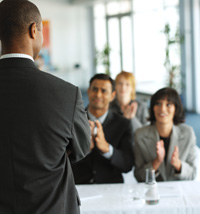 Ideally, the business icebreaker happens when a group of co-workers gather for the first time. Even if you aren't shy, it's usually stressful and intimidating to integrate into a new group of colleagues. And businesses often believe they have a vested interest in helping their employees to integrate and instill in them as sense of belonging. Not only will it help them work better together as a team, but it will lend employees a sense of loyalty to the company.

The following are icebreaker activities intended for groups of complete strangers:

Next, we'll talk about what to do with a group of coworkers that already know each other but need a boost of camaraderie.

It's Not What You Know, but Who You Know

Icebreakers not only help everyone get comfortable with each other, but they also help businesspeople in networking. Networking is the practice of meeting people and forming relationships that can help an individual's professional endeavors. By increasing your circle of acquaintances, you have more resources to call upon when you need a business deal or favor. To improve networking skills, experts often suggest staying up-to-date on news, entertainment and sports. When you meet new people, bringing up these subjects work very well as conversational networking icebreakers. 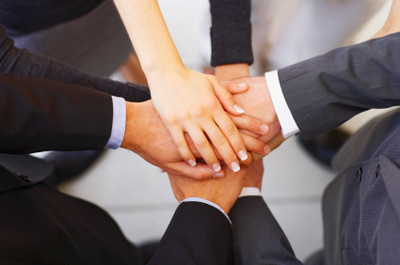 When among strangers, people who normally hate icebreakers will often agree to play along for the sake of politeness. However, after a group has worked together for a while and still hasn't naturally hit it off, it gets even harder to warm them up to each other. When people first start working together, there's a window of opportunity to easily become friendly. But as time passes and co-workers remain unfamiliar with each other, it gets exponentially more awkward. Worse still, a disagreement or misunderstanding could cause co-workers' relationship to freeze over -- as a result, business communication can break down.

To melt this thick ice and rebuild an atmosphere of teamwork, businesses need to apply the blowtorch of icebreakers. Use the following icebreakers for organizational communications that will bring teams together in an office:

An icebreaker can be relatively easy to pull off among co-workers in the average office, but what about when you're faced with energizing a large conference room or lecture hall full of icy business people?

Getting away from the office is an effective icebreaker method in itself. Sometimes, just giving people a new setting can help refresh and relax them. To do this, businesses organize retreats for employees. Staff travels as a group to an out-of-the-way spot, such as a lodge. For activities, leaders can employ one or several of these team building icebreakers. 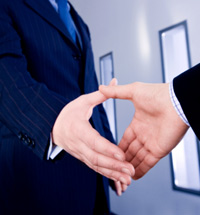 Large group icebreakers are arguably the hardest to pull off. Because many icebreakers can be time-consuming and simply boring, they prove unsuccessful. If everyone has a chance to speak to the whole group, by the end, no one will be able to keep anyone straight. The trick here is to keep it simple and fun.

Here are some effective kick-off icebreakers for large-group meetings:

If you have a large group, you may want to break people up into small groups to do their own individual icebreakers. We'll learn about those small group icebreakers on the next page.

There isn't always time for an icebreaker activity. But there are other ways to break the ice. Although icebreakers commonly refer to organized activities, some people also use the word to apply to presentation icebreakers. These are stories or one-liners used in presentations -- usually involving humor -- to liven people up and create a positive atmosphere. 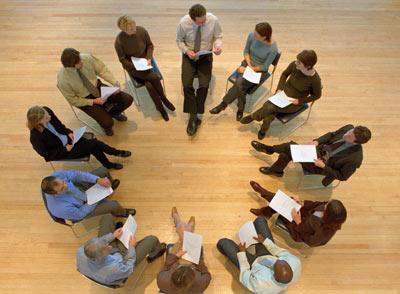 A small group meeting of a dozen or so people is great opportunity to play icebreakers.
Romilly Lockyer/Stone Collection/Getty Images

­Here are some popular choices for small group icebreakers at large meetings:

Remember that many of these games can be used in multiple situations. "Interviews," for instance, can be a great icebreaker for strangers and for small groups. Use your best judgment and assess the atmosphere of the office or meeting to pinpoint the appropriate game. To raise the stakes, offer a prize to the winners of the games and tell the people ahead of time what they're competing for.

For more information on games and the art (and science) of communication, investigate the links on the next page.