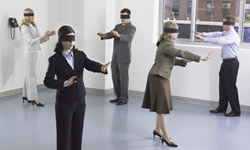 Many icebreakers are not only awkward, but are recipes for social disaster. See more corporate life pictures.
Barry Rosenthal/UpperCut Images/Getty Images

It's your first day at a new job and you're ready to make a solid impression. You walk into the office and you're handed a card with an animal on it, you're instructed to take off one shoe and you're told to put on a funny hat.

You've walked into an office icebreaker, and you can kiss your dreams of a professional first impression goodbye.

In the spirit of fighting fire with fire, corporate icebreakers fight awkward with more awkward. Not surprisingly, this tactic often fails. Icebreakers are games intended to encourage strangers to connect. Although they are most commonly used in teen groups or religious retreats, businesses have begun to adopt them to get their employees to interact and to increase teamwork. But many people feel meeting co-workers for the first time is hard enough without being forced to play a ridiculous game concocted by over exuberant group leaders.

All too often, icebreakers backfire. The triviality of the games easily insults people's intelligence and insinuates that these professional adults lack the social skills to meet each other on their own. Worse still, they may further alienate shy folks who don't like the spotlight. On top of that, icebreakers are often time-consuming and just plain boring. Some icebreakers even border on offensive and invade participants' personal space.

Nevertheless, you can bet out-of-touch group leaders will continue to force uncomfortable icebreakers on unsuspecting victims. In the business world, it's difficult to walk the line between making people comfortable and keeping it professional. But the icebreakers we'll investigate in this article fail miserably on both accounts.

On the next few pages, we'll cover some of the worst. Here's hoping you don't have to endure one of them yourself.