Same-day Delivery: How It Started and Where It's Going 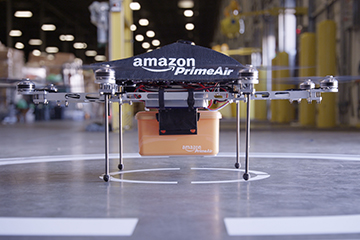 Amazon is aiming to trim that one-day delivery down by using drones.
Amazon/Corbis

Same-day delivery is called the "holy grail" of Internet retail — and for good reason. If a company like Amazon could figure out how to offer a huge selection and ship orders anywhere in a matter of hours at a low cost, they could very well put brick-and-mortar stores out of business.

Many companies have crashed and burned on the quest for same-day delivery. Take Kozmo.com, for instance. Founded in 1998, the company promised to deliver customers in six markets anything they wanted to their front door in an hour or less. But with no minimum order, people were buying candy bars that cost far less than the actual cost of delivery. When they tried to implement a delivery fee, customers revolted, and soon Kozmo went belly up in one of the biggest busts of the dot-com bubble [source: Stahl].

That's the challenge Amazon faced when they first tested same-day delivery in 2009: How to deliver orders quickly without going broke. Perhaps wary because of past debacles, they started off slowly, offering the service in just seven cities and charging a $6 fee for Prime members and $15 for non-members [source: Stone]. By 2014 customers were really embracing the service, ordering 10 times as many items with same-day delivery that year over the previous one [source: Chang]. It was likely that level of success that led to the free option introduced in 14 cities in May 2015.

What's next for Amazon same-day delivery? Certainly they will be looking to expand the service as competition from rival retailers increases. They're also experimenting with services like Prime Now that could shorten delivery time to an hour — something they're already doing in Manhattan, Brooklyn, Miami and Baltimore [source: Amazon Prime Now]. And then, of course, there's the famous Prime Air, which proposes to deliver packages in 30 minutes or less using drones [source: Prime Air]. That's still awaiting regulatory approval from the Federal Aviation Administration, though. Until then, we'll have to wait at least an hour for Amazon orders, or, heaven forbid, two whole days.

It's been nearly a year since I accidently enrolled in Amazon Prime, and now I don't know what I'd do without free two-day shipping. But same-day shipping? What is this madness? It's too bad the service is only available in big cities, though. I guess us small-city folk won't be enjoying it anytime soon — but then again, it wasn't that long ago that we were all waiting a week or more for standard shipping.