The Competition for Same-day Delivery 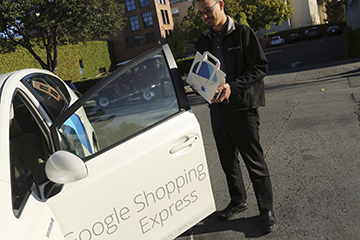 A Google Express courier picks up an order to deliver to a customer.
Robert Galbraith/Reuters/Corbis

Just because same-day delivery is difficult doesn't mean other companies aren't trying to do it as well. Another online powerhouse, Google, is giving it a shot, as are brick-and-mortar stores like Wal-Mart. There's also a whole host of independent delivery services that act as a middleman between retailers and the customer. Like Amazon, all still have pretty limited delivery areas and product selection but are hoping to expand in the future.

Google's same-day delivery service is called Google Express. Customers order online through the Google Express website, and unlike Amazon, they choose a four-hour window for the items to be delivered. If there's too much demand for a certain time frame, it won't be available. Because Google isn't an online retailer, it fulfills orders through local retailers, which means available stores and inventory vary depending on location. Right now, those locations include, Manhattan, Chicago, Boston and Washington, D.C., West Los Angeles and much of the area from San Francisco to San Jose. The cost? Google Express members pay $95 per year or $10 per month for free same-day or overnight delivery on orders $15 and over; shipping is $3 for orders under $15. Non-members pay $4.99 for orders over $15 and $7.99 if the total is less than that cost [source: Google].

With lagging sales in recent years, Wal-Mart is also trying to boost its online popularity with same-day delivery. The company's service, known as "Wal-Mart Grocery," takes advantage of their pre-existing network of "warehouses" in the form of more than 5,200 stores nationwide — although, for now, it's available only in San Jose, Denver, Phoenix, Huntsville (Alabama), and Bentonville (Arkansas) [source: Wal-Mart]. Customers order online, and, as with Google Express, items are delivered during a specific time frame. There is no membership fee; rather, prices are determined by the time slot the customer chooses [source: Wal-Mart Grocery].

Many other third-party companies are popping up to make same-day deliveries on behalf of stores. They utilize on-demand couriers, moving packages from the store to a customer's home in the same way Uber and Lyft provide transportation for people. Instacart, for example, has an online store in which customers can purchase items, and an independent "personal shopper" will retrieve and deliver them [source: Instacart]. Other services, like Deliv, simply partner with retailers to add a same-day delivery option to the store's existing website. Contract drivers then deliver the purchase to the customer [source: Deliv].