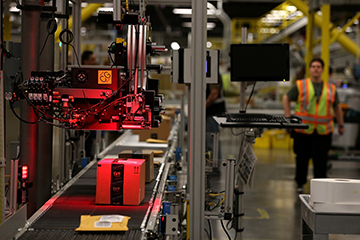 Imagine the complicated logistics it takes to receive an online order, pull the product, package it, put it on a truck and ship it to the customer, all within a nine-hour time frame. It's a feat that seems nearly impossible, and since Amazon's figured out how to do it, they aren't too keen on divulging their secrets to competitors. That's why they've been very tight-lipped about how exactly they're able to make same-day delivery happen.

Here's what we do know. Amazon stores its inventory and prepares orders for delivery in massive warehouses known as fulfillment centers. "Massive" might even be an understatement: The company's Phoenix fulfillment center, for example, employs 1,500 workers and occupies an unbelievable 1.2 million square feet [source: Wohlsen]. They are the picture of efficiency: A computer tracks each item as it's delivered, unloaded onto a conveyor belt and shelved. When a customer places an orderl, employees known as pickers receive an alert telling them what to retrieve and where. They place the item in a bin, which, once filled, is sent on a conveyor belt to the packaging area. There the items are boxed and sent out for same-day delivery, although Amazon isn't saying exactly who operates its trucks.

In just four years between 2011 and 2015, Amazon added 50 of these warehouses, bringing the total to 109 worldwide [source: Chang]. That means Amazon can quickly ship orders just about anywhere, especially in metro areas where fulfillment centers are strategically located in close proximity to millions of people. That short transit time is a crucial part of the company's same-day delivery service.

Amazon is also pretty quiet about the financial details of same-day delivery, but many observers believe they're taking a loss — for now. As the service becomes more popular, the money will start rolling in, especially with few companies in a real position to compete with them [source: Alba].