Browse the article 7 Warning Signs of a Looming Recession 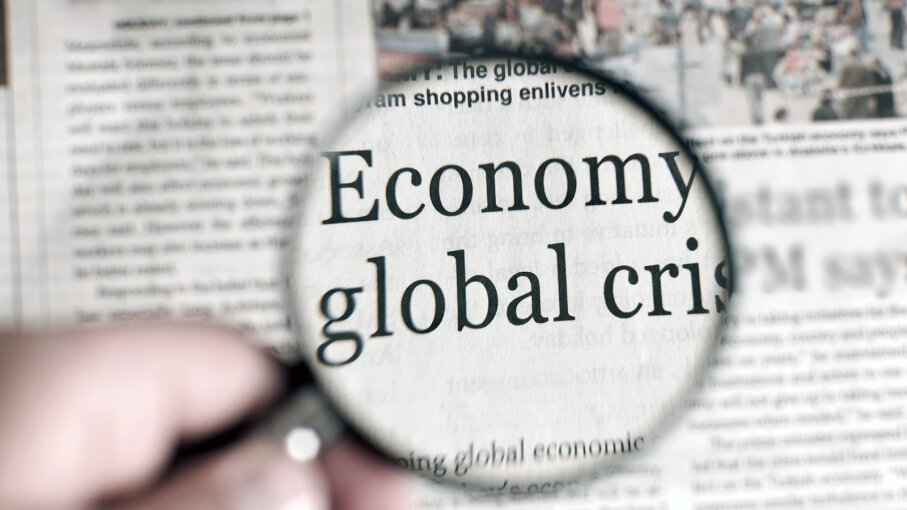 While the economy has regained full strength since the last recession ended in 2009, no one expects those gains to last forever. fotosipsak/Getty Images

The Great Recession of 2007 to 2009 was the worst financial crisis in the United States since the Great Depression of the 1930s. Still fresh in our memories are the collapse of the housing market, major banks on the brink of failure, steep stock market losses, withered up retirement portfolios and double-digit unemployment.

While the economy has regained full strength since the last recession ended in 2009, no one expects those gains to last forever. In fact a flip on the U.S. treasury bond yield curve (which you'll learn about on the next page) caused a huge drop in the stock market on August 14, 2019. The past 50 years have taught us that every heady economic high must have a soul-searching low. Nearly 10 years into steady economic growth, economists and investors are anxiously looking for signs that the party will soon be over.

If you hope to predict the economic future — good luck, even "experts" routinely get it wrong — it's time to familiarize yourself with the clearest warning signs of a looming recession. Here are seven. 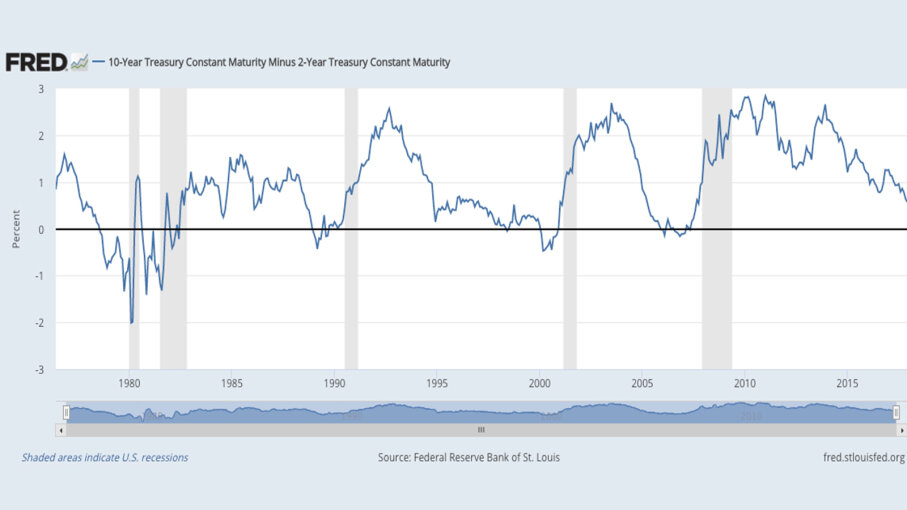 Normally, the yields for short-term bonds are lower than longer-term bonds, but every so often those rates flip upside down. Federal Reserve Bank of St. Louis

One of the surefire signs of a looming recession is a geeky little graph called an inverted treasury yield curve. (We wrote an entire article about that graph.) United States treasury bonds are the most reliable, low-risk investment around. But since the yield (or return) on treasury bonds is relatively low, investors tend to avoid sinking their money into bonds unless the economic future looks bleak.

When investors are nervous about the direction of the economy, the demand for long-term treasury bonds (five-year, 10-year and 30-year) goes up and their yields or interest rates go down. Normally, the yields for short-term bonds are lower than longer-term bonds, but every so often those rates flip upside down. And when that happens, a recession is usually around the corner.

The treasury yield curve has flipped or inverted before the last seven recessions with only one false positive back in 1998. The good news is that it takes an average of 18 months between an inverted yield curve and the start of a recession, so there's plenty of time to stock up on canned goods and ramen noodles for the coming dry spell. 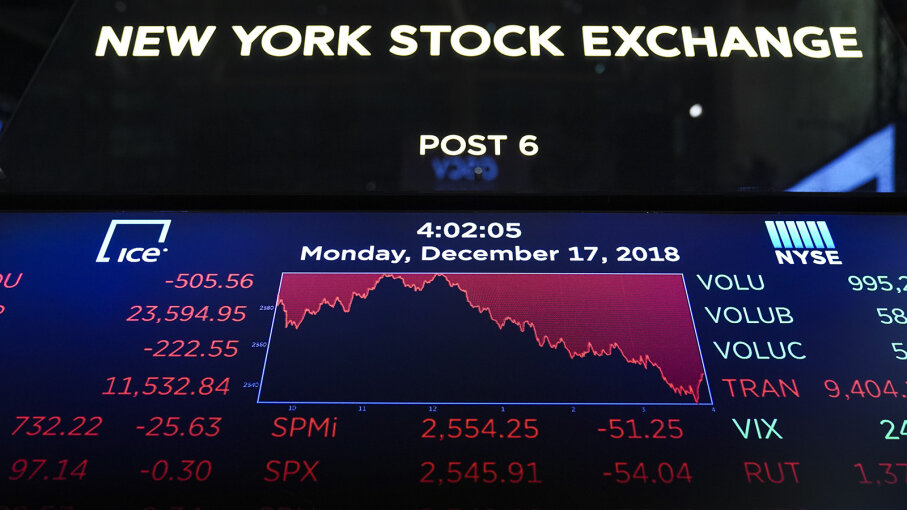 The longer a bear market lasts, the greater the odds of it signaling a recession. Drew Angerer/Getty Images

The stock market is a reliable indicator of overall economic health — except when it isn't. Back in the 1960s, the economist Paul Samuelson famously quipped that the stock market predicted nine of the last five recessions. The joke (hilarious!) is that a stock market plunge doesn't always signal a recession.

But there is plenty of reason to pay attention to stock prices as a sign of what's to come. George Morgan, a professor of finance at Virginia Tech's Pamplin College of Business, explains that the stock market gives a snapshot of the economy six months down the road.

"A sustained drop in equity values is a leading indicator of the lower profits expected to be earned by corporations," Morgan says, "or at least lower profits than the stock market had previously expected."

If businesses lower their expectations for the future, that means they'll be taking out fewer loans and hiring fewer people, which impacts the broader economy. And when stock prices across the board go down significantly, it starts to eat away at the long-term savings of average consumers, causing spending to drop.

When CNBC analyzed post-War stock market performance for hints of upcoming recessions, it found a strong correlation. The longer a bear market lasts (defined as a drop of 20 percent or more in stock prices), the greater the odds of it signaling a recession. Bear markets that cause recessions lasted 508 days on average. 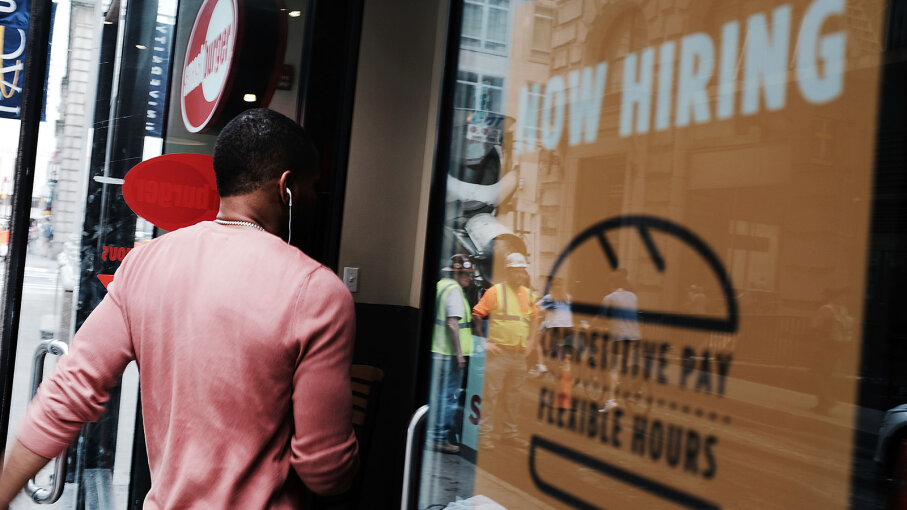 The No. 1 expense for businesses is employee salaries and hourly wages. When unemployment levels are low, that leads to a scarcity of qualified workers on the job market, which forces employers to offer higher and higher pay. Wes Moss, chief investment strategist with Capital Investment Advisors and host of the weekly radio show "Money Matters," says that fast-growing wages are a sure sign of a coming recession.

"Wage inflation is the black widow of economic indicators," Moss says. "When wages grow 4 percent or more year after year, it becomes an unsustainable expense for businesses and they have to slow growth and cut jobs."

Despite substantial economic gains over the past 10 years and a near record-low unemployment rate, real wages have lagged behind. From September 2017 to September 2018, wages grew only 2.9 percent, well below Moss' 4 percent threshold. But with wage growth on a slow and steady rise since the end of the Great Recession, the possibility of future cutbacks is still very real. 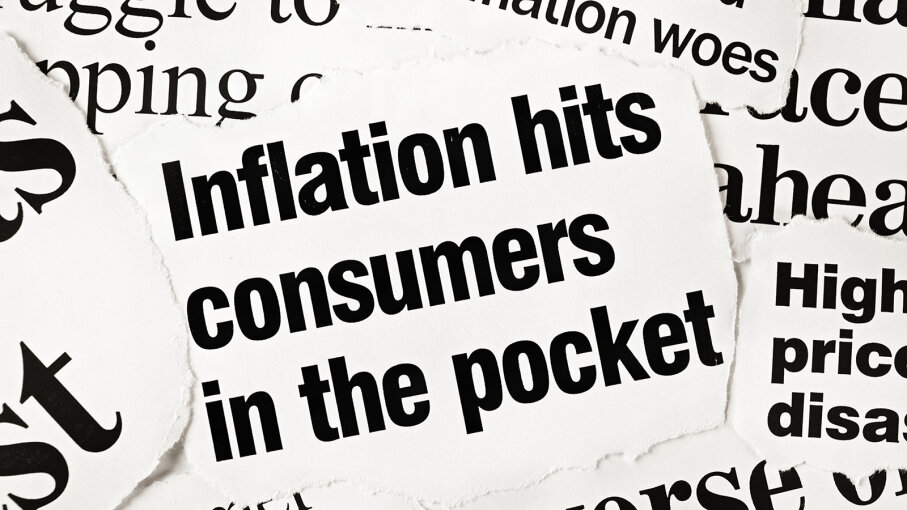 When inflation heats up too quickly, it forces the Federal Reserve to cool the economy down by raising interest rates. RapidEye/Getty Images

Like wage growth, some level of inflation is a good thing. It means that unemployment is low, workers are being paid well and they are out spending their money. As demand for consumer goods increases, so do retail prices, which is what drives inflation.

But when inflation heats up too quickly, it forces the Federal Reserve to cool the economy down by raising interest rates. The danger of raising interest rates is that it makes borrowing more expensive. And if companies are already nervous about an upcoming recession, they'll be even less likely to borrow and invest in new equipment and new hires if interest rates are high.

If the Fed plays its cards right, it can keep inflation at manageable levels — 2 percent is the target — without raising interest rates so high that they choke off economic growth. The timing of those rate increases is the key. If the Fed guesses wrong and raises rates right as the economy begins to sputter, it could accelerate an economic meltdown. 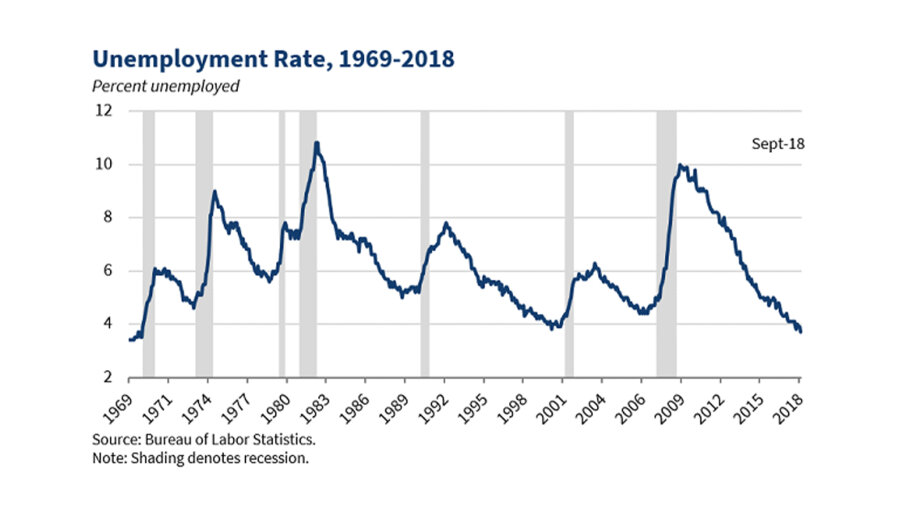 A super-low unemployment rate could also be the smoke before an economic fire. Bureau of Labor Statistics

At various points in 2018, the U.S. unemployment rate registered 3.7 percent, the lowest rate on record since 1969. That's great news for America's workers. As we mentioned earlier, low unemployment means employers have to raise wages to attract top talent in a tight job market. But recession watchers also know that a super-low unemployment rate could also be the smoke before an economic fire.

Historically, the U.S. economy has gone into recession nine months after the unemployment level reaches its lowest point or "trough." It makes sense that unemployment levels would start to rise in the lead up to a recession and spike during the worst of it. In 2009, at the height of the Great Recession, the U.S. unemployment rate hit 10 percent.

The hard part is knowing exactly when the unemployment rate has hit rock bottom. It's easy to look back on a 50-year graph and spot each trough and peak, but those movements are much harder to track in real time. That doesn't stop economists and investors from obsessively monitoring the weekly report of unemployment insurance claims looking for signs of a broader trend.

A Drop in Housing Construction and Sales 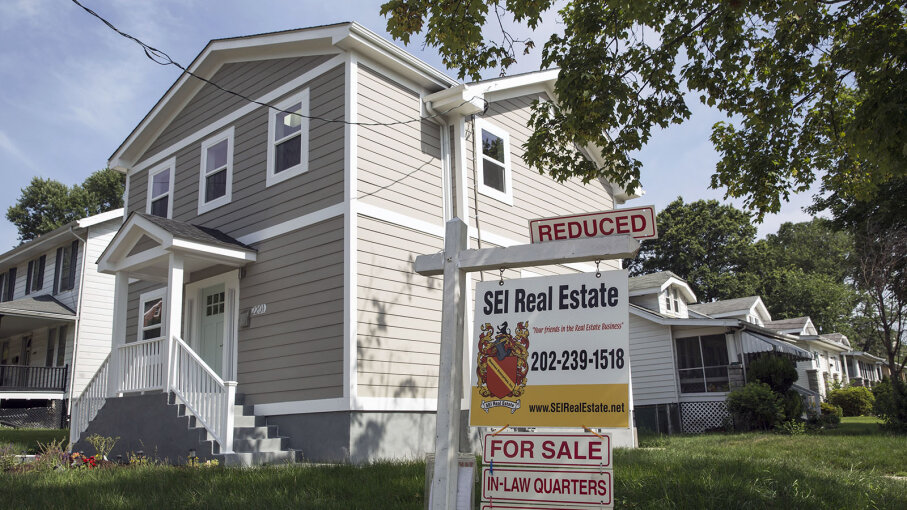 Two of the clearest indicators of a pending recession are sharp drops in both new housing construction and home sales. Drew Angerer/Getty Images

The housing market is one of the major drivers of the U.S. economy. If you add up all of the money Americans spend on building houses, buying houses, renovating and renting houses, it adds up to one-sixth of GDP. That's why two of the clearest indicators of a pending recession are sharp drops in both new housing construction and home sales.

Economists pay close attention to the number of housing "starts" or new housing construction projects breaking ground each month. An increase in housing starts means that builders are confident that the economy will continue to perform well over the next six months and that consumers will have the available cash to buy new homes.

Other housing indicators act as a barometer of consumer confidence, like the monthly reports of pending home sales and existing home sales. When consumers feel good about their future job security and earning potential, they are more likely to make a big financial plunge like buying a new home. When the worry about layoffs and stock market declines, housing sales numbers go down.

Looking back at housing data since 1960, housing starts have decreased 25 percent on average before each recession.

The Big Picture Gets Blurry 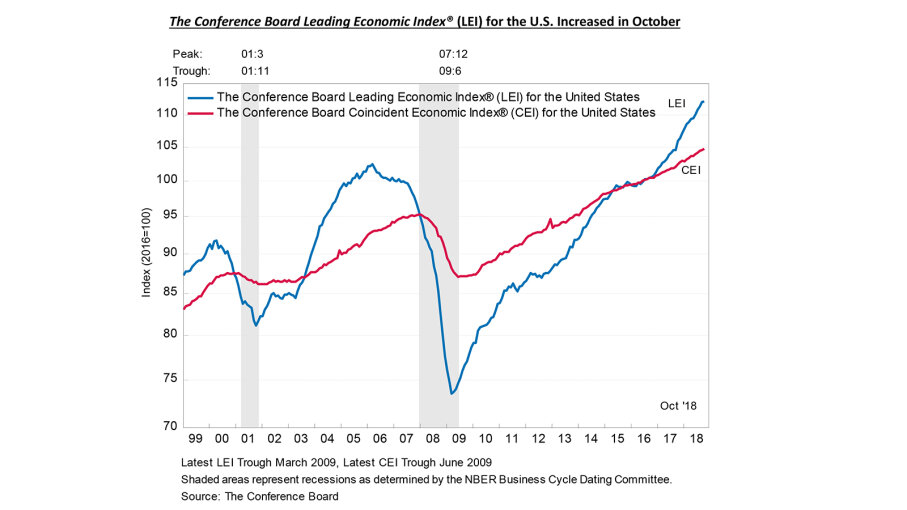 Most of the indicators we've cited are individual numbers looking a single aspect of the U.S. economy like unemployment or inflation. While all of those figures are loosely interrelated, sometimes it's helpful to take a step back and look at the big economic picture. One of the best measurements of overall economic health is the Conference Board's Leading Economic Index (LEI), a collection of 10 key economic indicators bundled into one convenient score.

The composite LEI score is called a "leading" economic index because it's composed of economic indicators that are supposed to lead or precede future developments. You'll recognize some of the 10 indicators tracked by the LEI, like stock prices and new building permits, but there are also some new ones. Here's the full list:

When the economic future looks bright, manufacturing orders grow, unemployment claims stay low and consumer confidence soars. That sunny outlook is reflected in a steadily increasing LEI score. But sometimes the opposite is true. Investment adviser Wes Moss says that when LEI growth slows to zero, "you have a recession right around the corner."