by Stephanie Watson
Prev NEXT
2 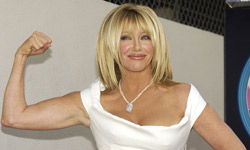 Suzanne Somers shows off her famously toned physique as she's honored with a star on the Hollywood Walk of Fame.­
Vince Bucci/Getty Images

After five years of playing the ditzy Chrissy Snow on "Three's Company," followed by a few lesser-known roles, it looked like Suzanne Somers' career had come to a crashing halt. Then along came the infamous infomercial with the famous shot of Somers sitting on a couch, squeezing a butterfly-shaped exercise device between her thighs. The spot had men salivating and women reaching for their purses. Though the ThighMaster became major fodder for late-night talk show hosts (David Letterman featured it on one of his "Top 10" lists), Somers had the last laugh, selling some 10 million ThighMasters in 120 countries around the world [sources: Piccalo and McGinn]. She turned her infomercial run into a veritable empire, churning out 300 different products, including jewelry, skin care items and clothing. Who knew Chrissy would turn out to be such a brilliant businesswoman?