by Stephanie Watson
Prev NEXT
9 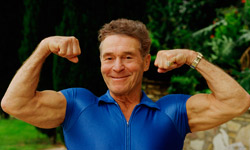 ­When an eternally youthful fitness guru promises that you'll look and feel younger just by squeezing some fruits and vegetables into a glass -- you listen. After all, this is Jack LaLanne, the guy who launched the fitness movement in the United States by flexing his carefully toned pecs on the very first TV workout show in the 1950s. This is also the guy who, to celebrate his 70th birthday, swam a mile (1.6 kilometers) while pulling 70 boats carrying 70 people [source: NNDB]. Now in his 90s, he's still active -- at least on late-night TV. Proving that he's still got it, LaLanne has sold more than 1 million of his Power Juicers [Business Week].