by Linda C. Brinson
Prev NEXT
5 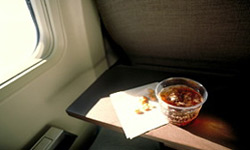 Thanks to airline deregulation, this paltry offering may be your only meal on a cross-country flight. Hungry yet?
Ken Reid/Getty Images

Remember the good old days, when you got a full meal when flying? When flight attendants were plying you with drinks at every turn? Now, you might be in danger of starving, with nothing but a small pack of peanuts or pretzels and a tiny cup of soda or water on a cross-country journey. The next time your stomach grumbles in the air, blame the Airline Deregulation Act of 1978.

The act didn't address food and drink. But it did relax rules on where and how frequently airlines fly and how much they charge, thereby stimulating competition and growth.

Enter startup, very-low-cost, few-frills airlines. To offer those low fares, they charged for food (if they served it) and baggage. They crammed more people into smaller spaces.

At the same time, many established airlines were expanding routes like crazy, trying to get more pieces of the deregulated market. When the dust settled, some of the startups were gone, and so were some of the former big-name airlines.

What wasn't gone was the idea that airlines could save money by cutting back on meals and legroom. Or the idea that passengers would pay for such things as the privilege of checking in early, or being allowed to bring their luggage along.

As fuel prices went up and the economy went down, passengers on many airlines found they were paying more fees and eating less food.