by Linda C. Brinson
Prev NEXT
9

Down and Out on the Farm 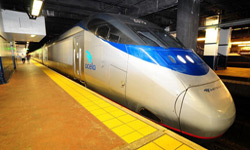 The high-speed Amtrak Acela train at a station in Philadelphia. Despite this innovation, Amtrak doesn't reach many rural areas.
Lisa Lake/Getty Images

People in rural areas are sometimes the unforeseen victims in deregulation.

The Railroad Revitalization and Regulatory Reform Act of 1976 and the Staggers Rail Act of 1980 made it easier for railroads to abandon passenger service, which had been a financial drain. Many went out of the passenger business. Congress had established Amtrak, a federally subsidized rail corporation intended to provide rail service nationwide, in 1970. Amtrak was supposed to be for profit, but it faced the same problems the railroads had. Passenger service wasn't a moneymaker.

Amtrak started service in 1971, but it never made it to many remote and rural areas. Deregulation a few years later meant that railroads no longer had to offer passenger service in addition to freight. Most dropped it and soon pulled up unused tracks. That left rural people without service. Eventually, high fuel prices and global warming made Americans think about alternatives to automobiles. But by then, much of the passenger rail service was history.

Some regulations require various industries to serve rural areas where business isn't as profitable. Deregulation can mean rural folks get left out. When Americans began the massive shift to cell phones instead of landlines after telephone deregulation, people in areas with poor cell phone coverage were out of luck. Those may be the same areas where deregulated cable TV companies won't venture. And that can mean no affordable broadband Internet.

Want a little entertainment? Thanks to deregulation, just a little is what you might get. Keep reading to find out why.