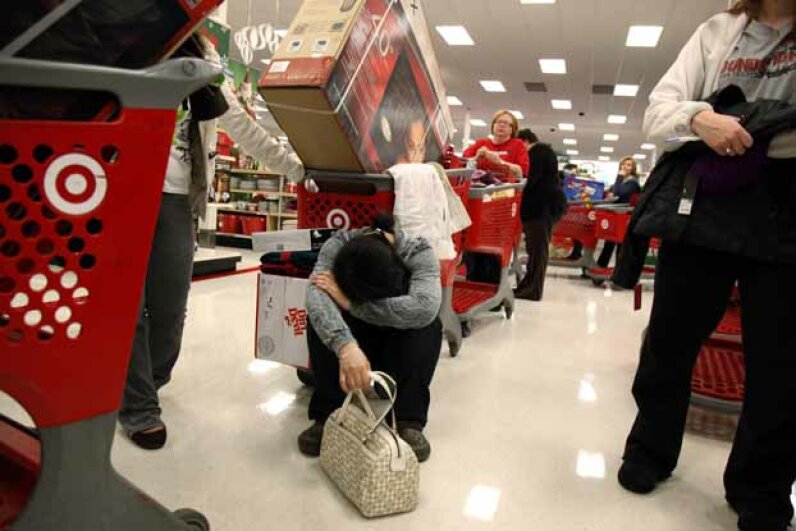 Trinh Pham, 22, of Arlington, appears exhausted as she waits in line at a Target in Allen, Texas on Thanksgiving night, 2010. © David Woo/Dallas Morning News/Corbis

The 4 a.m. chill settles into your bones. You're on a mission, running a well-crafted strategy through your mind again and again. As you visualize the path you'll take into battle, the action draws near. Chuffing warm breath into your hands, you try to stay loose. It's a last-ditch effort to stave off a milieu of emotional and physical states: excitement, fear, adrenaline, fatigue. Now is the time for singular focus.

The line you've been queuing in for the last 45 minutes is starting to morph from orderly to insanity as everyone makes a break for the just-opened store doors. Whether you'll be one of the first few to snag a door prize remains to be seen. It's every shopper for himself. This is war.

We're not sure why ordinarily rational Americans lose their minds at the thought of picking up electronics at big discounts on the day after Thanksgiving. Perhaps the lack of sleep and the adrenaline rush from fighting crowds have something to do with it. To illustrate, we've uncovered 10 fascinating and terrifying Black Friday stories, which are unlikely to be surpassed now that online shopping has become so popular.

Shootout at the Toys R Us 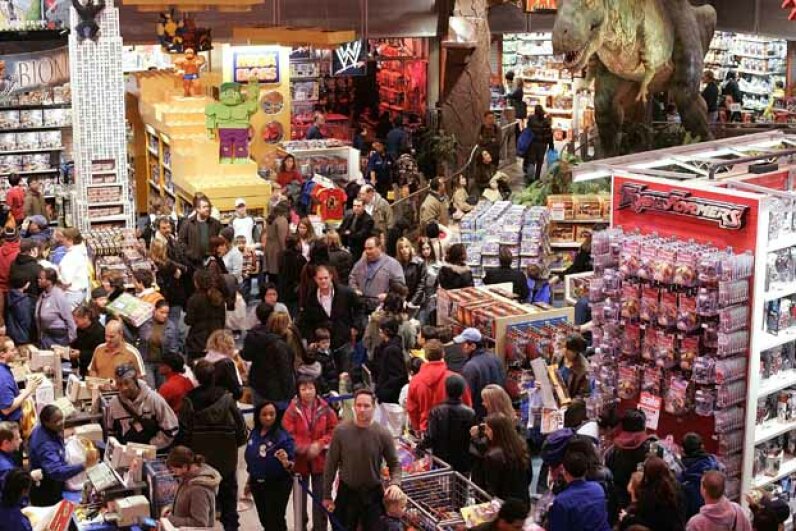 Shoppers crowd the floor at the Toys R Us store in New York City on Black Friday, 2006. Stephen Chernin/Getty Images

It began as any other Black Friday rush, but in 2008 at a Toys R Us in Palm Desert, Calif., something went terribly wrong. Two women began throwing verbal jabs and then actual jabs in the store's electronics department.

Then the two men they were with began fighting and drew handguns. As other shoppers scrambled to safety, the men turned Toys R Us into a scene from the Old West. They chased each other down the store aisles, firing and killing each other (but no one else) during the incident [source: Mehta et al.]. 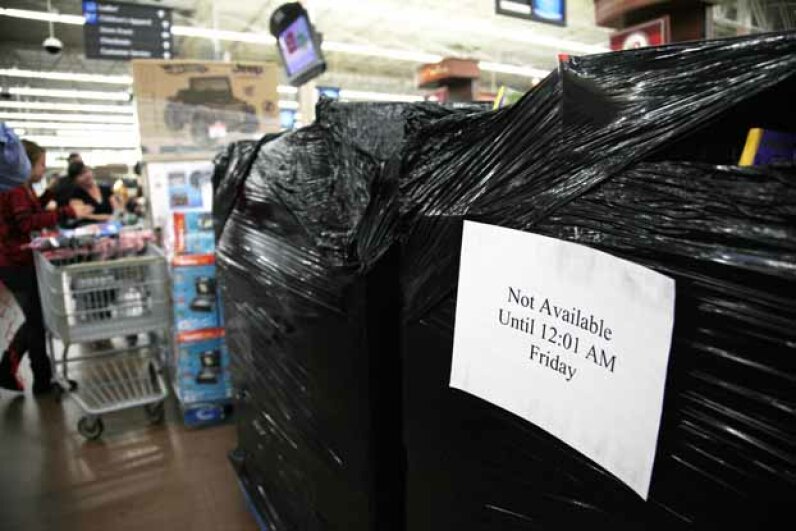 They Stepped Over His Dying Body 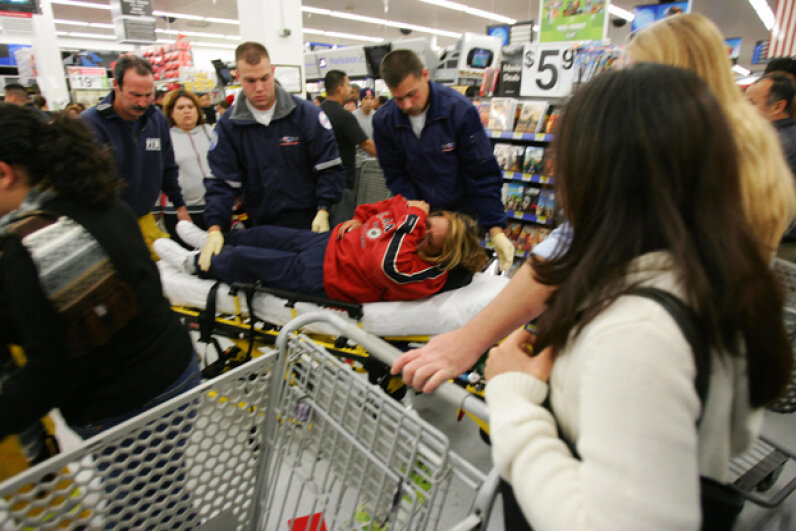 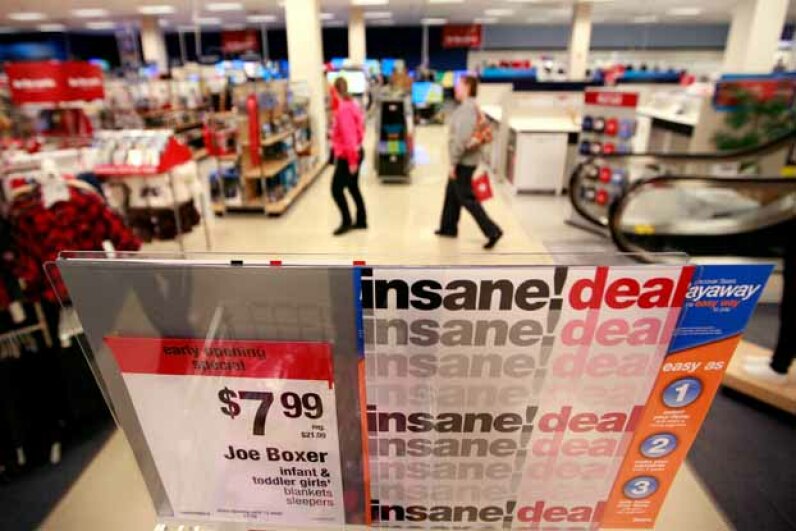 Perhaps the sign was a tip-off to the craziness that ensued at the San Antonio, Texas, Sears on Black Friday, 2012. Tom Pennington/Getty Images

No one likes a line cutter. But some people take it to extremes.

While waiting in line at a San Antonio, Texas, Sears at 9 p.m. Thanksgiving night in 2012, a shopper tried to cut in line. When another man objected, the offending line-hopper punched him in the face. The man who took the sucker punch pulled out a handgun, a move he later said he made in self-defense.

The line cutter fled. Police took the gun owner into custody but released him, saying he was within his rights as he had a concealed handgun permit. He was asked to leave the Sears but given a store voucher for his next visit. Amazingly, shopping resumed just 10 minutes after the incident [source: Ley]. 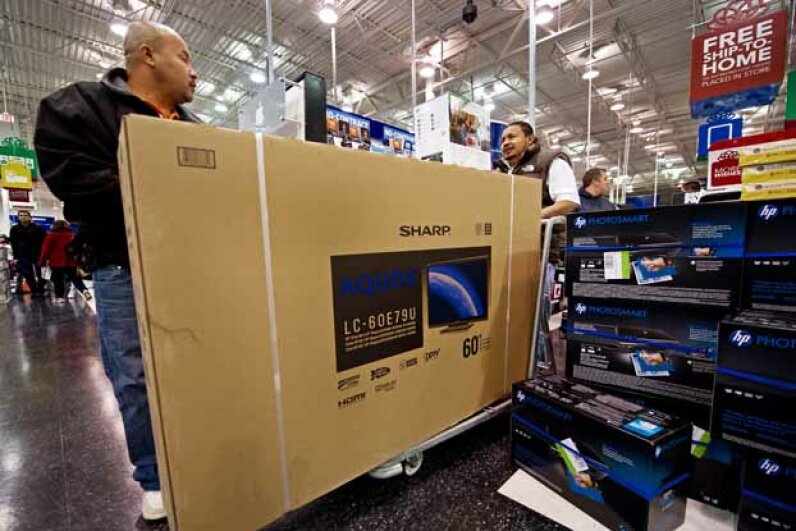 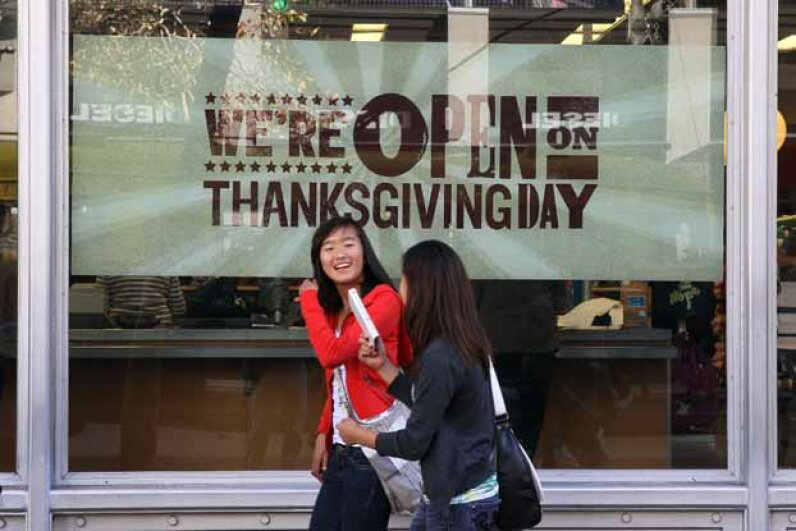 Pedestrians walk by an advertisement for Thanksgiving Day hours at an Old Navy store in San Francisco. Justin Sullivan/Getty Images

Unfortunately, shoplifters aren't a rarity. But when two women decided to steal goods from an Old Navy in Holland Township, Mich., on Black Friday in 2012, they took it a step farther. The shoplifters were stopped by a store detective in an adjacent parking lot after exiting the store with their stolen items. The detective took the goods, and the pair fled to a nearby vehicle.

But they didn't go far. As the officer attempted to write down their license plate, they circled back. One of the women pulled a gun, held up the detective and seized the merchandise. But not for long. Police caught the women and arrested them, while they were left holding the proverbial bag [source: Tunison]. 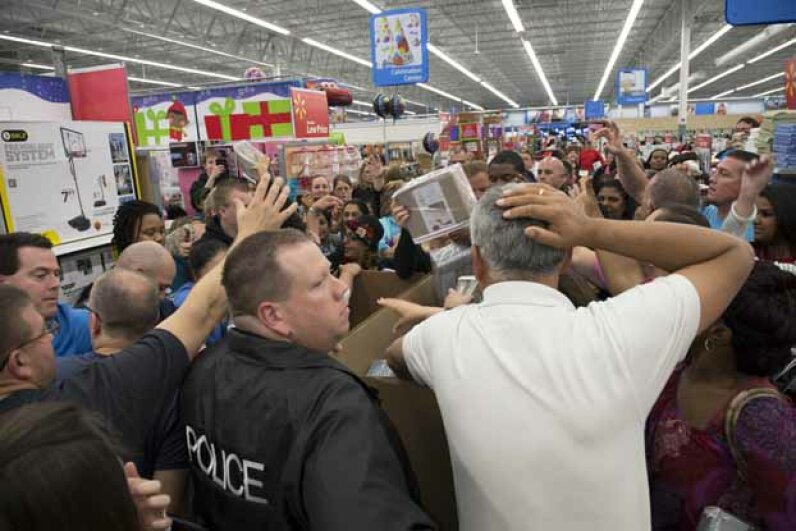 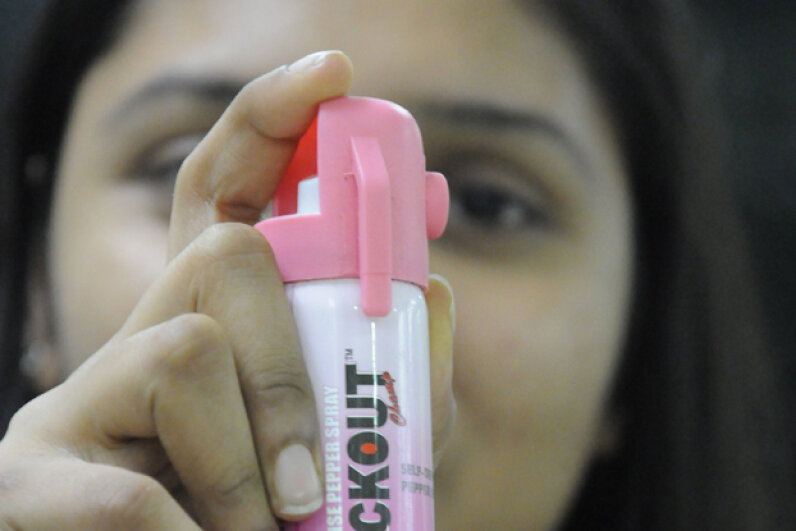 This woman holds up a can of pepper spray, similar to the one used by the shopper intent on snagging an Xbox away from other customers. Parveen Kumar/Hindustan Times via Getty Images

Here's one way to make sure you get your hands on the goodies: Keep the rest of the crowd away with some pepper spray.

That's what one woman did in her bid to snag a video game console on sale at a Wal-Mart in 2011. She sprayed about 10 fellow Black Friday shoppers, and somehow was able to pay for her items and leave without being stopped [source: CNN]. 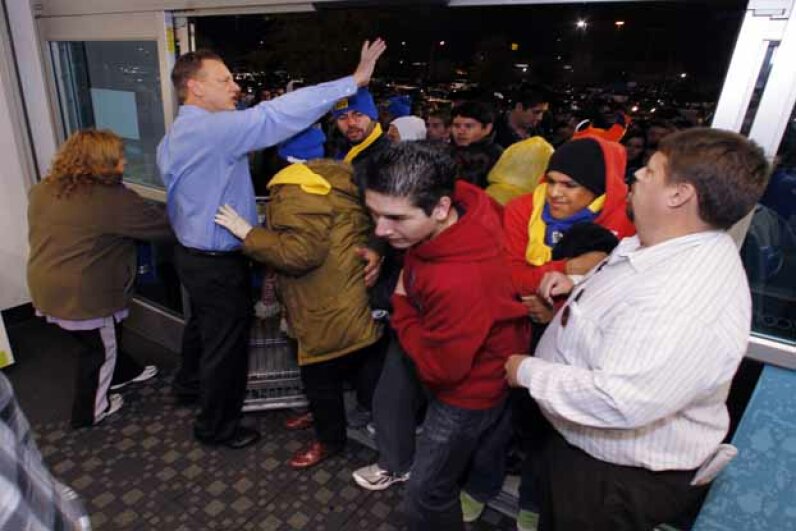 Outside a Best Buy in Augusta, Ga., on Black Friday 2010, some U.S. Marines were collecting donations for Toys for Tots. Inside the Best Buy, a man was attempting to smuggle a laptop computer out of the store under his jacket.

Staff spotted the shoplifter and confronted him. The man dropped the laptop, brandished a knife and ran out the door. One of the Marines attempted to stop him, and the robber stabbed him in the back. Other Marines and store staff pounced on the shoplifter and held him until police arrived. The wounded Marine eventually recovered [sourced: Cain and Emerson]. 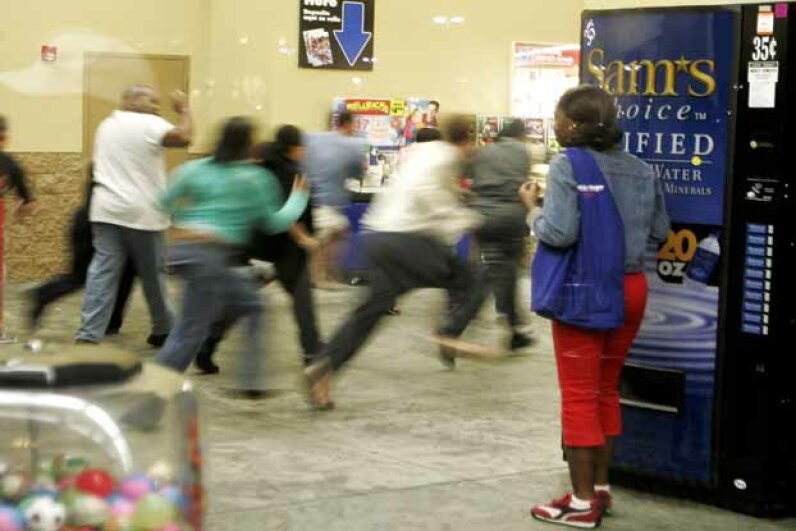 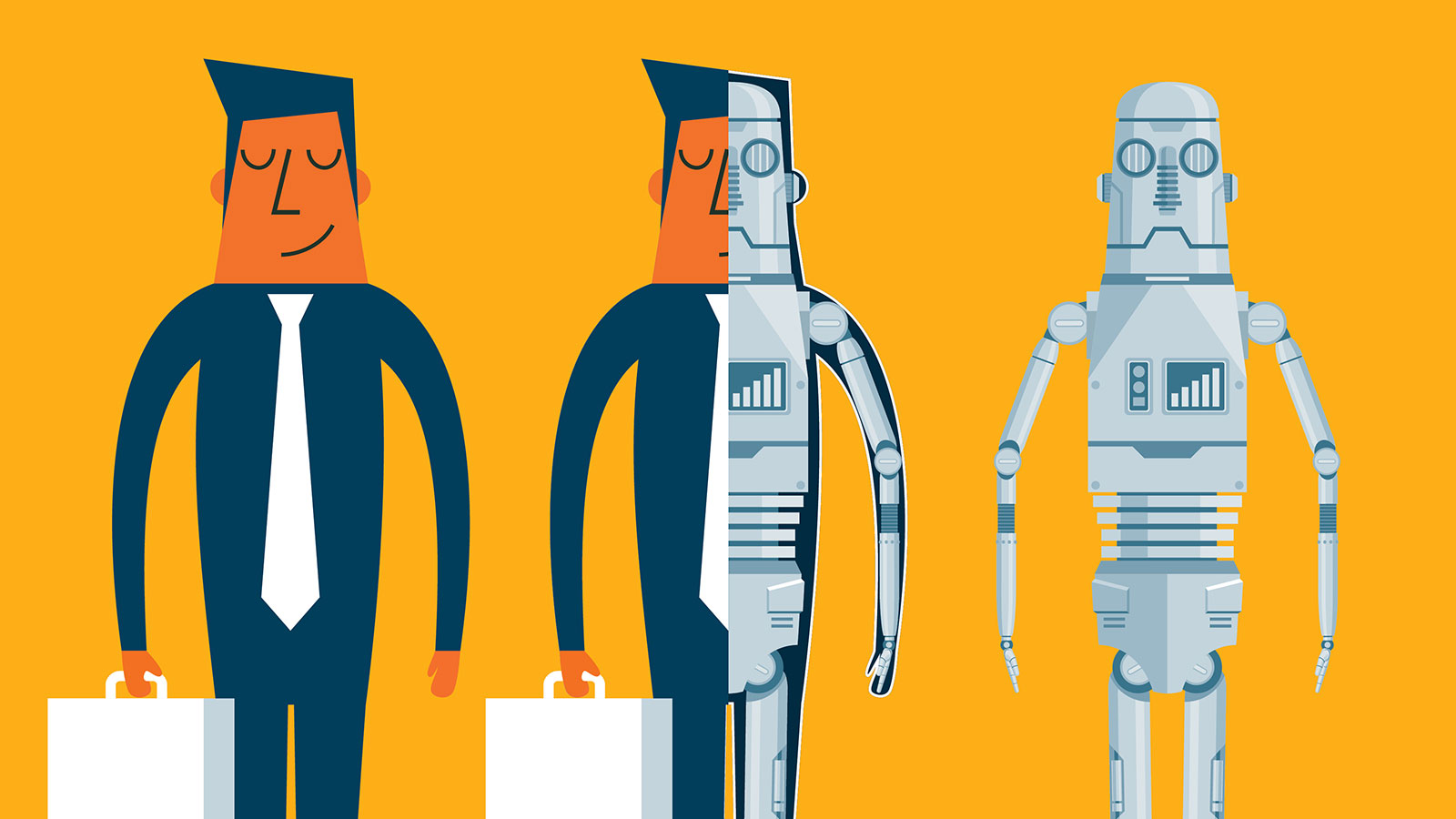