Why do Shriners drive those little cars? 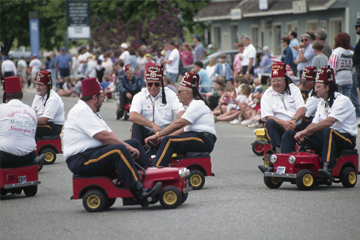 There's no big history or ritual behind the little cars, but they do help Shriners distinguish themselves in parades.
coloroftime/Getty Images

During every summer parade, you see them. Grown men wearing fezzes, squeezed into tiny cars, driving in circles, delighting children along the parade route and giving their parents a chuckle. "There go the Shriners again," we say to one another. But have you ever wondered why they dress up and drive those little cars?

The Shriners are a charitable organization born out of the Freemasons. With almost 200 temples around the world and 300,000 members, this fraternity is "based on fun, fellowship and the Masonic principles of brotherly love, relief and truth" [source: Shriners International]. It began in 1870 after a raucous group of Masons formed a subgroup to focus more on fun and fellowship than the organization's rituals. Adopting an Arabian theme and naming themselves the Ancient Arabic Order of the Nobles of the Mystic Shrine, the Shriners were born. The famous fez comes from this original Arabian theme.

To become a Shriner, one must still be a Mason – and that means committing oneself to a cause with brotherly spirit. In 1922, after nearly five decades of fraternizing as a club, the Shriners decided to put their membership numbers to use and start helping people. At this point in U.S. history, polio was devastating the country (and it would be years before a vaccine was available). Thousands of affected children needed orthopedic care. The Shriners voted to charge each member $2 per year to fund the construction of the first Shriners Hospital for Crippled Children, now known as Shriners Hospitals for Children. The hospitals treat children in need free of charge; today, their focus is children with burn and spinal cord injuries.

What started with $2 membership dues has amounted to big philanthropic dollars. The Shriners' research on treatment and development for spinal cord rehabilitation costs nearly $25 million per year, and they spend $1,600,000 per day on their hospitals [source: Joppa Shriners].

However serious their fundraising and medical care for children, a big part of the Shriners' philosophy is still about fun. Their history is filled with silly antics and camaraderie. In 1906, they founded the Shrine Circus, a circus still operating today.

And what about those little cars? Well, there's no big history or ritual behind them. They're purely entertainment -- for the kids, of course. As a way of distinguishing themselves during parades, the Shriners started wearing elaborate costumes and driving tiny cars designed more for tricks than speed. Car and Driver magazine even investigated the cars to see what they're all about. These "modern go-karts" each costs about $1,600. The Shriners are so secretive about where the cars are made that the article's author could only pry out that they're built somewhere in Illinois [source: Huffman].

What Do the Symbols on the U.S. $1 Bill Mean?
How Do Gold Prices Work and Should You Buy Some?
Unexpected Connections: 10 Oddest Economic Indicators