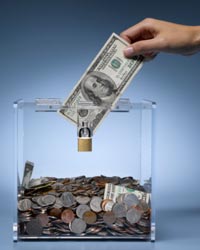 Charities have some strict rules concerning where their revenue comes from and who works for them.
Jeffrey Coolidge/Getty Images

Charities are always in need, especially during tough times. Though nonprofit financial experts estimate a volunteer's time is worth $19.51 an hour, charities can't survive on helping hands alone [source: Kadlec]. Thanks to a series of tax breaks intended to help nonprofits receive funding and spend it wisely, charities and other nonprofits can stretch each dollar -- but not without strict oversight.

Federal oversight of a 501(c)(3) starts at the outset. The first step in starting a nonprofit is to hold a meeting at which the governing board's roles are determined and assigned. From this meeting, the IRS needs to see formal articles of incorporation, which must include details about the structure of the governing board and administration, a formally stated charitable purpose of the organization, and planned activities. From then on, the group is limited to that purpose and activities [source: McRay].

An organization formally gains 501(c)(3) status by filing IRS Form 1023 and demonstrating adherence to federal and state criteria. Most organizations must file IRS Form 990 every year to maintain their status [source: Foundation Group]. They have to file for exemption within 27 months of recognition and, once established, the approved exemption application, the last three information filings and all supporting documents must be available for public inspection [source: Internal Revenue Service].

Considering the IRS is the designated government agency that regulates nonprofits, you might have guessed that most of the benefits associated with charity operation are tax-related. Read on to learn about specific tax breaks and other benefits that help charities operate.

Public charities are dependent on public support from government grants, individual donors, private foundations and other public charities. At least 33 percent of revenue must come from small donors that each give less than 2 percent of the organization's annual funding [source: McRay].

As we mentioned, 501(c)(3)s are exempt from paying federal, and often state, income taxes. Many states allow exemption from property and state sales taxes. Federal tax code also benefits charities' donors (except for donors to public safety testing organizations). Nationally, and in many states, donors can claim income tax deductions for contributions to 501(c)(3)s up to 50 percent of their income. The amount of the donation itself is not limited, just the portion that qualifies for tax deduction [source: Foundation Group]. Tax-exempt organizations that pay wages to employees may still be liable for federal income tax, social security tax and unemployment tax on its payroll.

IRS nonprofit status itself is a benefit to a 501(c)(3), since it means the IRS has already vetted the organization and it's therefore probably credible. 501(c)(3)s are granted special nonprofit bulk postage rates, and additional benefits can vary by state.

According to federal guidelines, charities must represent the public interest and be managed by a board of stakeholders. More than half the members of the board must be unrelated to each other by blood, marriage or business, and more than half must be unpaid by the organization. Nonprofits cannot work for or reward any private interests; that is, no individual or shareholder can profit or benefit from its assets or operations. Also, 501(c)(3)s must remain largely nonpartisan. They can't engage in legislative or political lobbying exceeding 10 to 20 percent of the organization's resources and assets, and then only if the legislation in question is related to the group's activities. No specific political endorsements are allowed [source: Foundation Group].

It might sound as if there's a lot that charities can't do, but sorting through the rules and regulations is worth the effort. As of May 2009, there were 948,954 public charities operating in the United States, so there are a lot of resources available [source: McRay]. The Lots More Information page provides plenty of helpful links.

Not everyone who works at a charity is a volunteer. Salaries at financially stable nonprofits can rival for-profit corporations; those with lower salaries offer better benefits, such as increased vacation and sick time, tuition reimbursement, and flexible work schedules to promote work-life balance. Nonprofit employees are usually ineligible for stock options and profit sharing because nonprofits simply don't have those structures.

Executive compensation is often debated by people who believe public funding shouldn't pay high salaries and charity executives should be primarily motivated by their cause. Many nonprofits defend competitive pay to compete with for-profit companies for top talent. Though most charities believe that serving on a board should be a volunteer position, some nonprofits do offer a stipend. The IRS strongly discourages this, as it violates the codes prohibiting individuals from profiting, but it's allowed as long as it doesn't exceed a recognized market average [source: ASAE & The Center For Association Leadership].