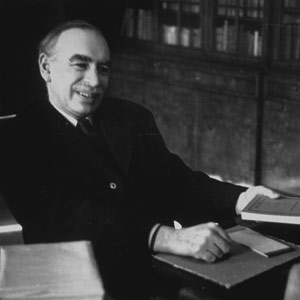 Under the influence of John Maynard Keynes, the United States turned away from Say's Law and trickle-down economics in the 1930s.
Tim Gidal/Picture Post/Getty Images

­All capitalist economies go through natural ups and downs. When a down hits for an extende­d period of time, it's known as a recession. Economists argue about the best way to handle a recession when it happens and what government can do to reinvigorate the economy. One may assume that when a recession hits, even supply-siders would jump ship and (at least temporarily) abandon the policy of giving tax breaks to the wealthy. But many don't. In fact, one foundational pillar of trickle-down theory was concocted as a cure for recession.

French economist Jean-Baptiste Say proposed a radical idea in the early 19th century. He said that when economies suffer downturns, the solution is to encourage the market to produce more output. Although people thought at the time that overproduction and lack of demand were the cause of a downturn, Say argued that wherever there are workers, there's demand not being met. The challenge is to make more of whatever is demanded, which will drive down costs. When these products become more affordable, more people will buy them, business will become profitable, and more workers can buy more things. This "build it and they will come" philosophy is known as Say's Law.

According to Say, when the economy goes south, the government should encourage more investment and production. Trickle-down theory evolved from this law, hypothesizing that tax breaks to the wealthy will encourage production that propels the economy out of a recession. So rather than recessions being the exception to the trickle-down rule, recessions are the very problem that trickle-down economists seek to ease.

For a long time, most economists and politicians in the United States accepted Say's Law as gospel -- that is, until the Great Depression. By then, a new theory emerged that sought to debunk Say's Law. British economist John Maynard Keynes insisted that a suffering economy results from overproduction and lack of demand, not the other way around. He said that in a recession, government should give the economy a shot of steroids in the demand side of the equation, not on the supply side.

Keynesian economics advocates governmental policy that's more popular among the working class, such as pumping money into the market to encourage spending, lowering taxes on the poor (who consume) and raising taxes on the wealthy (who produce). Keynes looked for short-term fixes, like adjusting the interest rates and increasing government spending, in order to restore stability to a volatile market.

It's because Keynes rejected Say's Law that he promoted these stabilizing quick-fixes. Grassroots supply-siders who haven't rejected Say's Law generally stick to their guns during a recession -- precisely because the law is specifically meant to ease recessions.

If you're still thirsty for more on trickle-down theory and the economy in general, explore the links on next page.