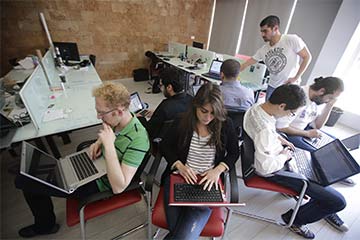 Lebanese entrepreneurs from different Internet startup companies work in the offices of accelerator Seeqnce in Beirut. The setup for startup accelerators is similar the world over.
JOSEPH EID/AFP/Getty Images

In global technology hubs from California's Silicon Valley to Bangalore, India, investors are searching for the next disruptive idea in technology, and the search often begins at tech startup accelerators. A tech startup accelerator is an organization created by experienced tech entrepreneurs to help early-stage tech companies develop their product, hone their business model, and — most importantly — connect with investors.

At high-profile tech startup accelerators like Y Combinator and Techstars, dozens of aspiring Bill Gates and Mark Zuckerbergs huddle with tech industry veterans and business mentors to take ideas from the "rough concept" stage to "market ready." Examples of successful Web startups that were born at business accelerators include Airbnb, Dropbox, Reddit and Plated.

Competition is stiff at the world's top accelerators. Young companies have to apply for coveted residences that last three to five months. If chosen, the lucky entrepreneurs receive thousands of dollars in seed money, expert guidance, a free place to work, and a chance to present their finished concepts to eager investors during "Demo Day."

Of course, tech startup accelerators don't provide all of these services out of the goodness of their hearts. Most accelerators take a percentage of all profits earned by the companies they help to launch. Even if the accelerator only receives a 6 percent stake in a startup, it can add up quickly when the young company is scooped up by Twitter or Yahoo! for tens of millions of dollars.

Nevertheless, the perks that accelerators offer to startups make entrepreneurs want to use these companies as opposed to going directly to a venture capitalist, where they might get funding but nothing else.

There are five major areas in which tech startup accelerators can help take a company from idea to launch. The first is a physical space to work. Most tech startup accelerators offer free office space to projects that they have chosen to fund. The typical model is an open co-working space, in which team members from several different projects share offices, conference rooms, workbenches, WiFi and coffee machines.

The second critical service offered by tech accelerators is seed money. Most accelerators award tens of thousands of dollars upfront to each team of entrepreneurs. That not only helps to cover early-stage business expenses, but also travel and living expenses for the three-month residency.

The third important service that accelerators provide is business and management consulting. As we said, it takes more than a great idea to launch a successful business. People who launch startup accelerators are typically veteran tech entrepreneurs who understand how to position a product or service in the market. Is it a consumer-facing application or something that would be even more valuable as a business-to-business service? And since software geeks aren't always the best business managers, accelerators can match inexperienced engineers with the right management teams [source: Mitra].

The last — and certainly not least — service offered by tech startup accelerators is providing critical connections to investors. Established accelerators are backed by teams of angel investors and venture capital firms that invest big money in the most promising business ideas. 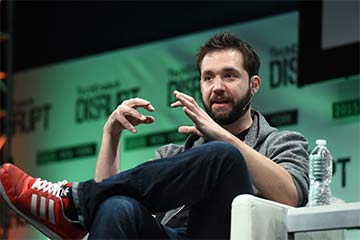 The tech startup accelerator process almost sounds like the premise of a reality TV show — "Big Brother" meets "Shark Tank." Tons of talented young entrepreneurs apply for very few spots with the biggest and best-known accelerators. The lucky teams move out to a new city and new environment, work grueling hours side by side in a shared space, and dream about their "Demo Day" debut in front of deep-pocketed investors.

After reading the application, Y Combinator invites the top prospects to Silicon Valley for in-person interviews. Yes and no decisions are made the very next day. For accepted teams, Y Combinator offers a standard deal of $120,000 for a 7 percent share of the company (nonprofits are exempt) [source: Altman]. If the team hasn't legally founded a company yet, Y Combinator can help with that, too.

Teams are flown out to the San Francisco Bay Area, where they spend the next three months developing their ideas and business plans. Y Combinator, unlike many startup accelerators, doesn't provide office space. Teams work where they live, but come in to Y Combinator headquarters for "office hours," one-on-one consultations with partners and experts. There are also group events like weekly Tuesday "dinners" — really a half-day conference — featuring candid conversations with influential speakers (yes, they got Zuckerberg).

The climax of the startup accelerator process is Demo Day, when startups in various stages of development get to pitch their business idea to a room of 450 invitation-only investors [source: Y Combinator]. In the weeks and months following Demo Day, Y Combinator continues to consult with startups, offering advice on choosing the best investment offers.

The relationship between startup and accelerator doesn't end with a funding offer. One of the huge benefits of partnering with an accelerator is access to a powerful network of alumni and business partners. A stamp of approval from Y Combinator, for example, gives young companies access to executives and entrepreneurs across Silicon Valley.

Pros and Cons of Tech Accelerators

Winning a spot at a tech accelerator must feel like winning the lottery. To a pair of 20-something entrepreneurs, what could be more exciting than a $120,000 blank check and a chance to mingle with Silicon Valley icons?

The pros of being invited to participate in an accelerator program seem obvious: a generous injection of seed capital, an instant network of collaborators and mentors, and the promise of direct access to deep-pocketed VCs with an eye for winning ideas. But could there also be a downside to accelerators?

Some critics worry that the number of accelerators worldwide is growing too quickly, from a handful in the late 2000s to more than 200 in 2013 and doubling every year [source: Koetsier]. With the opening of each new accelerator come more promises of seed capital, three months of speed-developing and a coming-out party to eager investors. But is there really enough money out there to fund the thousands upon thousands of startups pumping out of the global accelerator scene?

Insiders say no. Unless you get the blessing of a really big-name accelerator like Y Combinator or Techstars, there's a very good chance your big idea will get lost in the noise of a hundred overhyped "Demo Days" [source: Griffith].

Even Y Combinator, which boasted a $30 billion portfolio of companies in 2014, deserves a closer look. Of that $30 billion, a full two-thirds — $20 billion — was held by only two companies, Airbnb and Dropbox [sources: Clampet, Ha]. Outside of those two companies, only 20 of Y Combinator's 716 seed-funded startups were worth $100 million or more in 2014 [source: Altman].

Doing the math, that means only 2.8 percent of Y Combinators picks turned out to be breakout hits. Critics argue that a company can be just as successful without going through an accelerator (and giving up 6 or 7 percent equity), but it requires the kind of old-fashioned hustle, hard work and self-promotion that separates the zeros from the Zuckerbergs [source: Griffith].

The terms incubator and accelerator are often used interchangeably to describe organizations that develop young businesses into fully funded startups, but they're actually two completely different animals. Accelerators host short-term residences exclusively for early-stage companies, while incubators offer longer-term support and guidance to companies in all stages of development. Also, accelerators put up their own seed money for an equity stake in the company — incubators don't [source: Forrest].

If I could do it all over again, I would major in electrical engineering. Or computer science. Or anything other that what I actually majored in — comparative religious studies (yes, that's a thing). If you can string together three lines of code and come up with a catchy name for your startup — ZingBlat, TruMax, CodeFlipper — it seems like there are dozens of Silicon Valley venture capital firms lining up to throw cash at you. Then again, if I had any mathematical skills or even the tiniest logical bone in my body, I probably would have majored in something more "practical" the first time around. Thank goodness I have three children. Odds are I can force at least one of them to major in something lucratively geeky. Somebody has to fund Daddy's retirement...