Few issues have brought Republicans and Democrats together like the economic stimulus package that was pushed through the U.S. Congress with breakneck speed in early 2008. When the Chairman of the Federal Reserve Board, Benjamin Bernanke, suggested action, Bush proposed and Congress passed a bill in an effort to jolt the economy out of a period of slow growth and housing recession. One of its main purposes was to provide tax rebates to lower- and middle-income people. But how can a small windfall in your pocket jump-start the economy and prevent a country from falling into a recession? 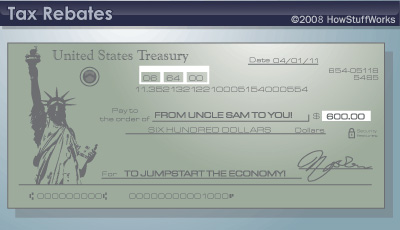 If you are a U.S. taxpayer, the government may send you a tax rebate check in the hope that a burst of consumer spending will jolt the economy back to health. See more tax pictures.

If you've read How Recessions Work, you know that recessions often aren't diagnosed until they are well under way. So, as soon as economists start to worry, lawmakers hasten to prevent one from occurring. Just as the 2001 tax rebates seemed to help dull an impending recession, Congress is hoping they will help again in 2008.

Members of Congress want the tax rebates to prompt people to buy more goods and services and thus knock the economy back on track. If enough people quickly spend their bonus cash, it will send a boost of demand into the economy, which should then encourage companies to increase supply and create more jobs. If all works according to plan, more jobs will lead to more spending and thereby keep the economy from slipping into a recession.

­The theory behind reinvigorating capitalist economies with tax rebates is a lot like the idea of overcoming static friction, which you might remember from high school physics. When economic growth is stopped, it needs a large force to get it started, which the tax rebates theoretically provide. From then on, the hope is that all it will need are free-market forces to keep it going.

So how can a tax rebate plan be pushed through Congress so quickly? And how soon can you expect a check? Read on to discover how this process plays out.

How is a tax rebate plan implemented?

Now that we know how tax rebates theoretically prevent economic downturns, let's find out how they are implemented. It may be surprising that opposing political parties can suddenly and overwhelmingly agree on something, but politicians can pass tax rebate plans quickly for a few reasons. Often, speed is necessary for the plan to work, considering the time it takes to get money to individuals. Lawmakers want people to start spending before economists can state with certainty that the nation is stuck in recession (which will cause people to hold on to their money). In addition, congressmen want to win over voters by approving bills that combat economic problems. Failing to go along with the plan might turn off voters [source: Neikirk].

For the tax rebates to work, economists say the "three T's" must fall in line. The plan should be:

The plan will have the best chance of succeeding if it comes at the right time before recession; is given to people who will spend it and doesn't have a long-term negative effect on the government [source: The Economist].

It may take as little as two to three months for rebates to arrive in mailboxes after Congress approves an economic stimulus package [source: Neikirk]. The amount you get depends on the particular plan passed. For the plan to work, Congress hopes that as many people as possible spend their money quickly.

Does that really happen? Or are people inclined to put it right back in the bank? It depends on your expectations of the economy. For instance, if you are afraid of losing your job in an impending recession, you might keep your money in savings. However, if you feel secure about your employment and the future of the economy (perhaps as a result of the tax rebate plan, itself), you might be inclined to spend it. To this extent, public perception is reality when it comes to the economy. For the rebates that were given out in the U.S. in 2001, about two-thirds were spent within six months [source: Johnson]. Those rebates may have helped to keep that recession at bay [source: Hill].

Not everyone buys this theory, however. Some argue that the 2001 rebates didn't do much to relieve the recession [source: Reidl]. Next, we'll find out why skeptics don't like the idea of tax rebates as an antidote to recession.

So can tax rebates help to prevent a recession? Not necessarily. Many economists and political commentators think they merely delay an inevitable recession or even hurt countries in the long run. Here's a rundown of some objections:

Overall, many agree that tax rebates provide at least temporary help and work best in conjunction with other fiscal and monetary policies that can help to prevent or relieve a recession. To learn more about personal finance and taxes, visit the links on the next page.