How to Prevent Stagflation 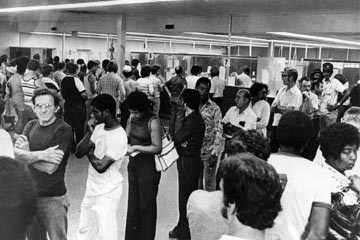 Unemployed autoworkers queuing at an unemployment office in Detroit, Michigan in 1980. The end of 1970s stagflation led to a significant U.S. recession.
Keystone / Hulton Archive/Getty Images

Economist Milton Friedman was one of the first to predict the stagflation of the 1970s. Friedman understood that the Federal Reserve wields incredible power to increase or decrease inflation in the U.S. In Friedman's worldview, inflation happens when the Fed allows too much money to circulate in the economy. His formula for inflation is simple: "Too much money chasing too few goods."

The dual mission of the Fed is to keep prices stable and maximize employment [source: Hobson]. The strategy for achieving this mission is called monetary policy. Modern monetary policy is heavily influenced by Friedman's theories.

In the 1960s, in an effort to maximize employment at all costs, the Fed lowered interest rates and flooded the economy with money. This led to increased demand for goods and services and rising prices. When it was clear in the 1970s that inflation was spiraling out of control, the Fed and the federal government took the erroneous approach of pumping more money into the system even as real economic output sagged. This fit Friedman's formula for inflation: too much money chasing too few goods.

It wasn't until 1979, with the appointment of Fed chairman Paul Volcker, that the Fed put Friedman's monetary policy theory into practice [source: Orphanides]. Volcker raised interest rates, choking off the flow of money into the economy. It meant high unemployment and a significant recession in the early 1980s, but inflation returned to normal levels and the economy eventually stabilized.

The threat of stagflation is greatly increased during a recession, when GDP is slumping and unemployment is on the rise. According to standard monetary policy, the Fed lowers interest rates during a recession to encourage borrowing and spending. The key to preventing stagflation is to avoid allowing too much money to enter the economy too quickly.

To successfully avoid stagflation during a recession, Fed economists need to accurately predict both the short- and long-term performance of the economy. They have the difficult job of identifying the turning point -- when the country emerges from recession -- and slowly pulling money out of circulation. This requires impeccable timing. If the Fed raises interest rates too soon, it could kick the legs out from under the restarting economy. If it waits too long, the economy can become overheated with extra cash, causing prices to rise and inflation to soar [source: Gogoll].

Keep reading for lots more information about the economy, the Fed and currency.