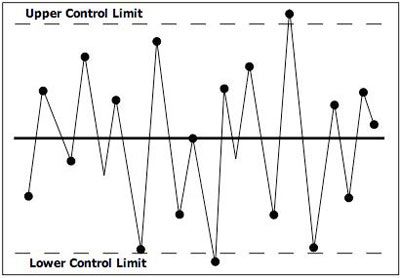 Here are the rest of the Six Sigma tools:

T-Test: In Six­ Sigma, you need to be able to establish a confidence level about your measurements. Generally, a larger sample size is desirable when running any test, but sometimes it's not possible. The T-Test helps Six Sigma teams validate test results using sample sizes that range from two to 30 data points.

Control Charts: Statistical process control, or SPC, relies on statistical techniques to monitor and control the variation in processes. The control chart is the primary tool of SPC. Six Sigma teams use control charts to plot the performance of a process on one axis versus time on the other axis. The result is a visual representation of the process with three key components: a center line, an upper control limit and a lower control limit. Control charts are used to monitor variation in a process and determine if the variation falls within normal limits or is variation resulting from a problem or fundamental change in the process.

Design of Experiments: When a process is optimized, all inputs are set to deliver the best and most stable output. The trick, of course, is determining what those input settings should be. A design of experiments, or DOE, can help identify the optimum input settings. Performing a DOE can be time-consuming, but the payoffs can be significant. The biggest reward is the insight gained into the process.

The Future of Six Sigma

Although Six Sigma has been around since the 1980s, it continues to evolve and change. Some of those changes involve the addition of new tools that have been developed and refined in practical, real-world situations. Other changes are related to how Six Sigma teams are organized. For example, in recent years, the Six Sigma White Belt has emerged. White Belts require much less training than Green or Black Belts and therefore offer a more rapid return on investment. Now, medium- and small-sized companies have access to all of the benefits that come with Six Sigma implementation.

But even large companies such as Motorola continue to push their Six Sigma programs to new levels. In 2003, the company began to see fewer benefits and savings coming from its Six Sigma methodology as costs related to poor quality began to rise once again. As a result, Motorola overhauled Six Sigma with powerful new tools, insights and advances. The changes worked: In 2004, Motorola achieved 42 percent revenue growth and an increase of 257 percent in earnings per share over the previous year's first quarter performance. This has rejuvenated interest in Six Sigma and has ensured its position as a serious business tool, not just a fad that will slowly fade into business history.

For more information about Six Sigma, take a look at the links below.