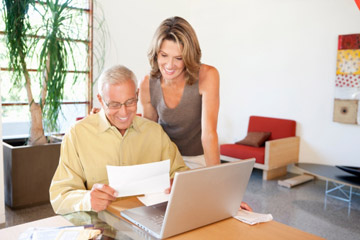 Most financial analysts would never advise borrowing from a 401(k) retirement account, but there are exceptions to the rule. See more retirement pictures.
Compassionate Eye Foundation/Marcy Maloy/Getty Images

A 401(k) is an employer-sponsored retirement account. It's a long-term investment account designed to reward employees who wait to cash out until retirement, while it penalizes those who withdraw money early. That said, there are a couple of ways to tap the funds in your 401(k) well before retirement without incurring taxes and penalties.

First, let's briefly explain how a 401(k) works. An employee chooses to set aside a percentage of each paycheck before taxes and invest it in an employer-approved investment portfolio. The IRS limits how much an individual can invest annually in a 401(k) before taxes. The 2019 cap is $19,000, up from $18,500 in 2018; workers over 50 can make additional payments of up to $6,000 [source: Rose]. Many employers offer to match a portion of employee contributions, usually 50 cents on the dollar up to 6 percent of the employee's salary [source: CNN Money]. These before-tax investments continue to grow tax-free, and the interest is compounded (re-invested) to maximize potential growth.

Once you reach 59 1/2 years old, you have a couple of options. You can cash out entirely and pay ordinary tax on the investment income, or you can avoid paying taxes by rolling the 401(k) distribution into another retirement account like an IRA. At some point, you will pay taxes to withdraw that money, but you won't right away. If you try to take money out of your 401(k) before you turn 59 1/2, the funds are taxed as regular income -- plus, you'll get hit with a 10 percent early withdrawal penalty.

One way to tap the cash in your 401(k) is to take out a loan. Most 401(k) plans allow you to borrow up to 50 percent of your balance or $50,000 (the IRS maximum) at competitive interest rates. The loan has a fixed five-year term with payments deducted directly from your paycheck. Even better, 401(k) loans don't count as a taxable event as long as you pay them back on time [sources: White, IRS]. The chief drawback of a 401(k) loan is that the money you borrow could've been accruing interest for those five years.

The only other way to withdraw money early from a 401(k) without paying the 10 percent penalty is through IRS rule 72(t), which allows you to deduct a fixed amount annually based on your age. The closer you are to 59 1/2, the more you receive each year, and you have to make the deductions for a minimum of five years [source: CNN Money]. As always, there's a catch: The money is taxed as income.

Most 401(k) plans include hardship provisions that allow employees to withdraw funds to cover specific financial hardships, such as medical bills, funeral costs and property damage. Despite their charitable name, hardship distributions aren't tax-free, and they often incur an early distribution penalty. To add insult to injury, you can't make contributions to your 401(k) for a minimum of six months after you take a hardship distribution [source: Anspach].

For lots more information on taxes and retirement planning, see the links on the next page.