There's a Tax Credit for That? 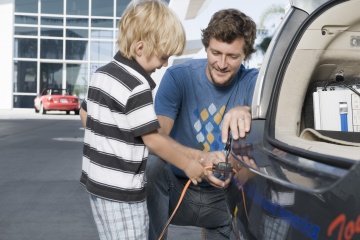 Environmentally friendly tax credits can help you score big when you buy an electric car.
moodboard/Corbis

Sometimes, the stars align and give you a tax break for something really cool — like an electric car. Before hybrid cars became popular with consumers, the federal government offered a tax credit for buying one. Those credits are gone, but if you're in the market for an electric car or plug-in hybrid, there's a nonrefundable credit for that. It's worth about $7,500 if the car meets eligibility requirements [source: Halvorson].

If you've always wanted to rehab an old building to create a business or income-producing historic property, the federal Historic Rehabilitation Tax Credit can cover up to 20 percent of the qualifying expenses. Even if the building is not necessarily historic, but built before 1936, you can get up to 10 percent of the cost to restore it [source: National Park Service].

Tax credits could even help you become a movie star without ever stepping onto a Greyhound bus to Hollywood. Many states use tax credit incentives to lure film productions away from southern California. New York, Louisiana and North Carolina are among the states with booming film industries because of tax credits. Even the Brits are taking advantage — an outpost of England's Pinewood Studios is being built in Georgia.

There's debate over whether these "credits" actually work. They're expensive for states and work differently than other tax credits. Companies can get the money even if they don't file taxes in the state offering the credits. But they also bring jobs to local production crews, caterers and electricians. Meanwhile, California is fighting back with even more aggressive credits to help keep the tinsel in Tinseltown [source: Verrier].

Keep in mind that these credits can be complicated, so before you run out to make a purchase or start a film production company, check with a tax accountant to verify the program is right for you.

I like to think of myself as someone with a keen eye for tax savings, especially those that my accountant tells me about. But before I reported this story, I had no idea just how many tax credit opportunities are available to U.S. taxpayers. You just need to know where to look. Now excuse me while I indulge my "Gilmore Girls" fantasy of finding a Dragonfly Inn-type historical bed and breakfast to restore (complete with green energy, of course) on the government's dime.