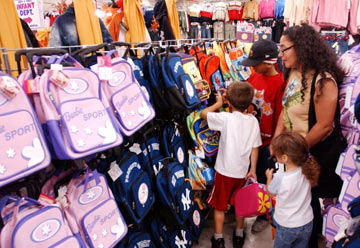 A family examines a selection of backpacks at a Brooklyn, N.Y., clothing store during a state-wide tax holiday in 2003.
Stephen Chernin/Getty Images

In the 1990s, a few states came up with an idea that would spread like wildfire. They would suspend the collection of state sales tax on certain items for a weekend in August to give parents a break on back-to-school purchases like backpacks, supplies and clothes for their children. It was a win-win situation for many retailers and shoppers. The retailers came out ahead because the tax break encouraged a lot of shopping. And the parents saved money.

For 2010, at least 15 states have sales tax holidays scheduled. They range from one day to one week [source: Taxadmin].

Sales tax holidays usually are targeted toward certain items. They often have upper limits on the price of items that can be bought tax-free. Back-to-school sales tax holidays are popular, but they aren't the only kind. Several states have recently started tax holiday weekends for appliances with the federal Energy Star efficiency rating.

Some sales tax holidays appear to be designed to influence behavior as well as to save shoppers' money. Louisiana and Virginia, for example, have tax holiday weekends for hurricane preparedness items. Louisiana also has a tax-free weekend for the sale of ammunition, hunting supplies and guns in honor of the Second Amendment.

In Vermont, the Legislature approved two one-day sales tax holidays in 2009, during which people can buy anything costing $2,000 or less tax-free. When shoppers turned out in droves on one of those holidays, March 6, 2010, retailers said it gave them a needed boost in a down economy. One speculated that the sales tax holidays encourage shoppers to buy locally rather than online [source: WCAX]. Buying online can be an easy way to avoid state sales tax. (Consumers are technically required to pay any sales taxes directly to the state -- even when the online store doesn't collect it -- but this rule is rarely enforced.) When tax isn't an issue, buying locally becomes more attractive because it's quicker and there are no shipping costs.

There's a catch, though: Sales tax holidays can be a victory for retailers and shoppers. But they're not great deals for the states that are losing the tax revenue. Some states have repealed tax holidays when the economy worsened. Others require that legislators authorize the holiday every year or two, and in some states such as Florida and Massachusetts, they've decided not to. New York, which was one of the first states to have a tax holiday, did away with the holiday in favor of removing state sales tax on clothing and shoes costing $110 or less year-round.

State sales taxes are a widely used fact of life in the U.S. But are they a good idea? Read on for some criticisms.