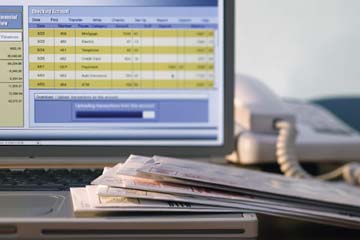 Online banking -- of which online bill paying is a small but important aspect -- is growing increasingly popular.
©2009 Jupiterimages Corporation

The age-old ordeal of sitting down with a stack of bills, a pile of envelopes, a mess of stamps and a soon-to-be diminished checkbook is dead and gone for many in the 21st century. That's because while paying bills still tends to deflate the checking account, the process doesn't have to include any actual checks or burn away half the afternoon.

More and more people are turning to various online outlets to take care of their routine financial obligations with a couple of clicks, saving time and offering the freedom to bank at their own convenience. But not everyone is onboard yet. According to a 2009 survey conducted on behalf of the American Bankers Association, 11 percent of people over the age of 55 prefer banking online, compared with 26 percent of people ages 35 to 54, and 38 percent of people ages 18 to 34 [source: ABA]. On average, that means online banking has a greater percentage of fans than any other method, whether it's banking at a branch, at an ATM, or through some other means.

We've already mentioned a couple of factors that can make converts out of people who like going to the bank. No more hopping in the car and rushing to get to the bank before it closes, for example. Now they can bank from the comfort of their couches -- and in the middle of the night, if they feel like it. On the other hand, people who still prefer making a trip to the bank often enjoy personalized service and feel more confident that their financial information is safe from the potential risks of cyberspace.

But once customers are interested in online banking, it makes sense they'd start paying their bills that way, too. After all, it's an easy step to go from checking your account balances to taking care of your upcoming phone bill. On the next page we'll look at some of the common features included in online bill paying. 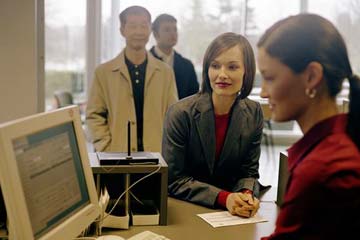 Some people appreciate the face-to-face customer service that comes with going to a bank. Others are more than willing to say bye to their teller.
Ryan McVay/Digital Vision/Getty Images

Setting up online bill paying is usually a straightforward process. If you decide to pay bills through your bank (more about the other choices you have on the next page), just go to its Web site and register. Then enter the pertinent information about the bills that need paying, which account you'd like the money to come out of and whether you'd like to set up automatic payments or take care of matters yourself each month. Typically you're then good to go.

Apart from just receiving and paying bills, with online banking you can also accomplish tasks like keeping track of your transactions, setting up money transfers and seeing images of cancelled checks. You can often sign up to receive e-mail alerts that deliver different notifications in the case of low funds or unusual activity. Some Web sites also offer budgeting tools, while others are compatible with financial planning software like Quicken.

Some of these activities may carry a fee depending on who you're dealing with. Be sure you know your bank's policy or a surprise fee could push you into the red and earn you an additional overdraft fee for your troubles. Also, in regard to online bill paying in particular, it's a good idea to make sure your money gets where it needs to go each month -- even if you've set up recurring payments -- because sometimes a company can change part of its billing information and your bank won't be able to deliver the funds.

Now that we've covered what online bill paying and banking have to offer, we'll delve into how the online experience differs from traditional banking, and how they stack up against each other in terms of security. 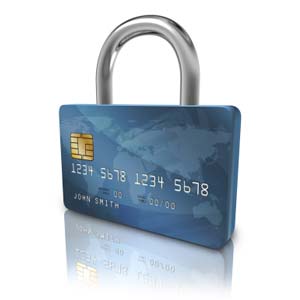 Ensuring your online banking experience is secure can take a few extra steps, but it can also be well worth the effort.
©iStockphoto.com/MarsBars

There are three main routes you can take to pay your bills online. You can pay them directly through your bank; you can pay them through the Web site of the payee (your utility provider, for example, or you credit card company); or you can use a third-party Web site to manage your payments.

Third-party sites such as MyCheckFree and Paytrust, allow customers to centralize their online bill paying in one place, coordinating them to help ensure all the bills are paid on time. The cost ranges from a monthly charge and transaction fees to nothing at all.

You can also decide whether you want to start using an online-only bank, which tend to offer better interest rates. If you do decide to go the online-only route, make sure the bank you choose is insured by the Federal Deposit Insurance Corporation (FDIC). It should say either "FDIC-insured" or "Member FDIC" very clearly on the Web site. For online bill paying, you'll want to keep an eye out for a little padlock icon that signifies a Web site is protected. Give it a click and some certification information should pop up; read it carefully.

In some ways, online bill paying is actually safer than other methods. People who pay their bills online can keep better track of their account activity, so they know right away if anything is amiss. They can also receive their statements and other financial notices through e-mail, so there's no chance someone can steal them straight out of their mailboxes or trashcans.

When paying bills online, just make sure you protect your personal data. For more about banking, visit the links on the next page.