What Is Homestead Exemption? 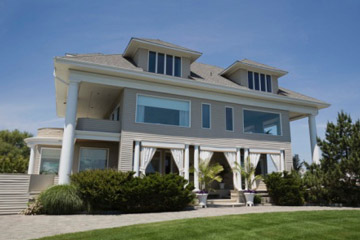 Your home may be protected in the case of a financial hardship.
Jupiterimages/Getty Images/Comstock/Thinkstock

The word "homestead" may conjure up images of pioneers staking their claim on the open prairie, but for legal purposes, a homestead simply means a person's primary residence. The term homestead exemption can refer to exemptions from property tax that homeowners can claim. It can also refer to homestead protection, which protects a person's primary residence in the case of financial hardship, such as the death of a spouse.

A widow or widower, for example, may be faced with higher bills than he or she can afford to pay, and selling his or her home may seem like the only option. In other cases, people facing overwhelming debt may decide to declare bankruptcy. Fortunately, there is a way to protect your home from creditors if you experience this kind of financial hardship.

The homestead exemption generally protects a primary residence from forced sale -- that is, having to sell the home to pay off creditors. The exemption was designed to help a surviving spouse and children keep their home. It also protects a debtor's residence if the debtor files for bankruptcy. In most states, this protection is not automatic. Homeowners must file an application for homestead exemption with the appropriate government office.

Exemption amounts vary greatly from state to state. New Jersey, for example, has no homestead exemption. In Massachusetts, the homestead exemption is $500,000. Florida's exemption, on the other hand, has no maximum dollar amount. In Florida, exemption is allowed as long as the property is no more than half an acre in a city or 160 acres elsewhere. In the past, this has allowed people to keep multimillion-dollar homes while declaring bankruptcy. The Bankruptcy Prevention and Consumer Protection Act was passed in 2005 to prevent abuse of the system. It established a $125,000 limit on state exemptions for people who bought their home within 40 months of filing for bankruptcy.

The federal government also sets a bankruptcy exemption amount, last adjusted in 2016 to $23,675 or $47,350 for married, filing jointly. The amount is adjusted every three years ending April 1 [source: The Bankruptcy Site]. In some states, homeowners may choose to claim the federal instead of the state bankruptcy exemption. Other states don't allow that option.

If a home is worth more than the amount of the homestead exemption, creditors may be able to force the debtors to sell. But they won't get all of the money from the sale. In this case, the debtors receive the monetary amount of the bankruptcy exemption.

Homestead exemption also provides some relief from property tax. A certain amount or percentage of the homestead is considered exempt from taxes. Homeowners who meet certain conditions, such as being more than 65 years old, a veteran or disabled, may claim additional exemptions. Again, the rules vary significantly from state to state. Because of the legal complications involved, most homeowners will want to consult with a qualified tax attorney to get the most from the homestead law in their state.