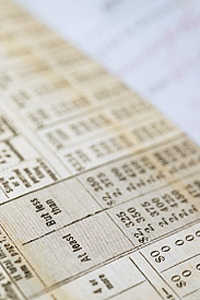 Federal income tax is progressive, meaning that the more money you make, the more you're expected to contribute. Every year, the Internal Revenue Service (IRS) publishes a Tax Table, commonly referred to as the tax brackets, which details the amounts and percentages owed in federal taxes by each income level and each type of filer: single, married filing separately, married filing jointly or head of a household.

The IRS defines your filing status as your condition on Dec. 31 of the tax year. So if you were single in 2009, but got married in January 2010, you still file your 2009 tax return as a single filer. Most married people opt to file jointly because tax rates are generally lower than applying separately, but everybody has their unique financial situations. But what does it mean to file as a head of household?

Head of household filing status applies to a specific set of circumstances. You can only apply as head of household if you were unmarried or "considered unmarried" at the end of the tax year, you alone pay more than half the cost of keeping up a home for the year (not necessarily your own home) and a "qualifying person" lived in that home for more than half the year. If the qualifying person is a parent, he or she doesn't have to live with you [source: IRS].

You're "considered unmarried" if your spouse didn't live with you for the last six months of the year and you're filing separately. As for qualifying persons, those could be either children -- natural, foster, stepchildren -- or relatives, including parents, grandparents, uncles, aunts, nieces, nephews, grandparents, brother-in-laws, son-in-laws and everyone in between. You need to prove that you provided more than half the financial support of the qualifying person during the tax year.

Once you determine your filing status, you can look up your taxable income on the IRS Tax Table to see how much taxes you will owe. Remember, this is taxable income, not total (or gross) income. (We'll talk more in the next section about the difference.) Also remember that your tax burden can be lightened by withheld taxes, deductions, exemptions and credits.

Remember that not everyone has to file a federal income tax return. You only have to pay federal income tax if you earned a minimum amount of money for your age and filing status. The IRS has a table for this, too. For example, if you're single, under 65 and earned at least $9,350, you must file a tax return. If you're married, filing jointly and both over 65, you need to have earned $20,900 to pay taxes. If someone has claimed you as a dependent, you don't have to file if you make less than $5,700.