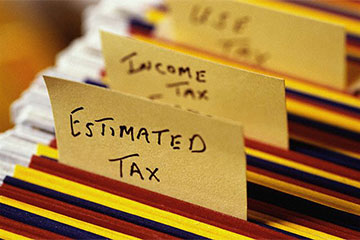 Expect to pay estimated taxes if you owe at least $1,000 when you file your federal tax return.
Philip James Corwin/CORBIS

Athletes, coaches and sports fans are fond of saying that ending a game in a tie is like kissing your sister. Apparently, they never had to pay estimated taxes. No one wins: not you, the person who has to fill out a form and pony up cash every three months, and not the paper pushers over at the Internal Revenue Service who should have something better to do than hound generally law-abiding citizens for their hard-earned money each quarter. So why do some folks have to suck it up and go through the quarterly ritual of guessing how much money they owe the tax man? Because they don't have someone else to do it for them.

The idea behind the tax system is to pay as you go. That's why most people who work have some money automatically taken out of their paychecks to cover what they're expected to owe in taxes at the end of the year. Some don't however, and others generate income from other sources that isn't immediately taxed.

A person who meets the following two conditions is generally required to pay estimated taxes throughout the course of the year [sources: Bell, Yale]:

It's up to the individual taxpayer to make this determination. The IRS won't tell you ahead of time that you're required to pay estimated taxes, but it will hit you with a penalty if you fail to do so, or if you don't pay enough. Those payments aren't deductible, even for business owners [sources: Bell, Yale].

People who earn most or all of their money by working as an employee of a business or entity generally aren't required to pay estimated taxes because their employer withholds a certain portion of their pay for tax purposes. The estimated tax requirement largely kicks in for nontraditional employees, like freelancers and those who are classified as independent contractors based on the circumstances of their employment.

One of the biggest groups of people who are obligated to pay quarterly estimated taxes are those who are self-employed. That includes people who run their own businesses. It also covers those who work for someone else and are considered independent contractors rather than employees. If the person or business that you work for sends you a Form-1099 at the end of the year, you're being categorized as an independent contractor. That decision can be appealed to the IRS [source: IRS].

The determination of whether a person is an employee or a contractor is a somewhat complicated legal issue that centers on how much autonomy the worker has over completing day-to-day tasks. Even workers with the same job title may fall into different classifications, based on their individual employment situations. Employers, the IRS and courts generally look at whether the employer controls when, how and where the worker completes job tasks. The more control the employer wields, the more likely the worker is to be considered an employee. Other factors include whether the employer provides tools and supplies, as well as whether it provides benefits like insurance, a pension and vacation pay. If the answer to either question is "yes" the worker may very well be an employee [source: IRS].

Other people who may need to pay estimated taxes over the year include those who make significant money through investments, alimony or spousal support, gambling winnings, bonuses or other prizes.

Because employers don't withhold estimated taxes from contractors' regular paychecks, it's up to the individual worker to settle up with the government every three months. That's right, Uncle Sam wants his cash per quarter. To avoid penalties, estimated taxes must be paid by April 15 for the first three months of the year, by June 15 for the second quarter, by September 15 for the third quarter and by January 15 for the fourth quarter. The fourth quarter deadline is extended to February 2 for people who file a year-end tax return and pay the entire balance due at the same time [sources: Bell, Yale].

Understanding when to pay is only half the battle. Estimated tax payers also need to know how much money to fork over every three months. Ideally, the tax payer is expected to calculate his or her total tax burden for the year and divide that figure by four to determine their quarterly payment amounts. Sometimes, however, that's easier said than done. Form 1040 ES is designed to help tax payers estimate their payment obligations by taking into account adjusted gross income and taxable income, as well as deductions and credits [source: Yale].

Not too keen on paying the tax man every three months? People who have full or part-time jobs in which their employer withholds some taxes can ask to increase the withheld amount in order to balance out other income that isn't taxed. Individuals who are eligible to take an IRA distribution can also have taxes withheld from this money in order to steer clear of estimated quarterly payments [source: Blankenship].

Like to bet on the ponies down at the track every once in a while? Enjoy the occasional trip to Vegas to hit the craps table? If you come home a big winner, you're likely going to be expected to kick up some of that money to the tax man. Gambling winnings are fully taxable and are required to be reported as income. The good news is that some losses may be deductible for tax filers who itemize their deductions [source: IRS].