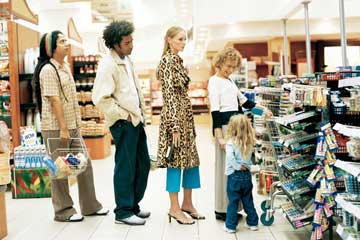 No, it's fine. We didn't have anything better to be doing.
Daly and Newton/The Image Bank/Getty Images

Little old ladies seem so harmless when you're standing behind them in the grocery store, with their strange selections of food slowly chugging down the checkout lane. But then they're apt to do something absolutely horrifying: Pull out a checkbook.

It's a dreadful sight, especially to those who were never terribly endeared to the ways of the checkbook in the first place. The sluggish scratching of the pen that fills in line after line of endless information, the slow glance back up with a concentrated stare at the total displayed on the register screen, the pensive return to the check and the continuation of the long looping scrawls -- it can feel like a prison sentence. And just when the handoff occurs and you think the whole painful ordeal is over, the cashier says those dreaded words: "And can I see your driver's license?"

Luckily, it appears the dark cloud is finally lifting from our lives. Checks are slowly being shuffled off this mortal coil, although it'll probably be a number of years before we can safely expect to entirely avoid the preceding nightmarish scenario.

There are a number of reasons for the shift -- and yes, speed is a major factor, although it's much more a matter of processing time as opposed to making elderly check-writing aficionados more convenient for the rest of us. With debit cards on the rise, and the ongoing amp-up of electronic check conversion, the process of paying for items has improved on several fronts -- for individuals, businesses and banks alike.

Electronic banking methods are not only faster (making it harder for consumers to float checks, stop checks and write fraudulent checks), they're also usually more secure, reliable and efficient, all of which helps make the entire process a great deal cheaper -- and quite a bit easier on the environment.

On the next page, we'll look at a few examples of how the 21st century is saying sayonara to paper checks of all sorts.

Checking Out: What's the Future of Checks in the 21st Century?

Check writers -- both old and young -- will see their favorite bill-paying option slip away as businesses stop accepting checks altogether. Airlines, grocery stores and retailers have all begun jumping on the bandwagon, leaving the days of the checkbook in the dust.

The trend isn't limited to the private sector, either; both the United States and the United Kingdom are shifting away from paper checks, too (or cheques, as Brits like to say). In the U.S., for example, food assistance offered through the Supplemental Nutrition Assistance Program (SNAP) is now delivered 100 percent electronically, and the paper coupons known as food stamps are a thing of the past.

The country as a whole received a big nudge in 2004 when the Check Clearing for the 21st Century Act (more commonly called Check 21) went into effect. Basically, banks no longer have to retain original checks; instead, they can now keep electronically stored images of checks, which can be dealt with in a much timelier and cheaper fashion. Businesses can also opt to instantly convert customer checks in order to complete electronic fund transfers, bypassing the inherent hassles that come with processing checks.

The U.K., on the other hand, is already devising a much wider-sweeping front-end approach. The current plan is to spend the coming years devising practical alternative payment methods for those lingering scenarios where check writing is still commonplace and. Pending several incremental reviews, check writing in the U.K. is currently slated for a permanent moratorium in 2018. Other countries have already seen the use of paper checks fall by the wayside.

But here and now, it's not just consumer-written or government-issued checks that are getting the ax. For example, more businesses are cutting out physical payroll checks and giving employees two options: direct deposit or prepaid debit cards. The exact details vary between companies and locations (often governed by state laws), but employees who're still clinging enthusiastically to the idea of paper payroll checks sometimes have fallback options, such as specifically requesting paper paychecks each pay period.

Perhaps the real question though, is how long we'll continue referring to them as checking accounts, even as the actual checks fade into memory. For more about the banking business and how to leverage it to your advantage, visit the links on the next page.