How has the iPad 2 made banking easier? 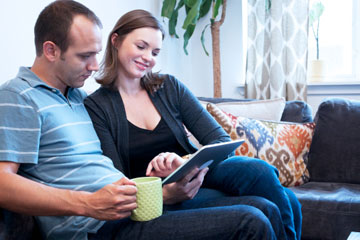 Some banks have released apps to help you do your banking on your tablet computer. See more banking pictures.
William Andrew/Photographer's Choice/Getty Images

It wasn't that long ago that making a deposit or withdrawing money from your checking account meant physically going to the bank and speaking with a teller. With the advent of the Internet, however, all that changed. Transactions could be completed from your computer at any time of the day or night. Now, with the release of tablet devices like the iPad 2, this process is becoming even easier.

While online banking can still be done on the iPad 2's Internet browser, many banks now offer purpose-built applications, or apps, with which you can manage your accounts from any iPad, iPhone, or iPod Touch. These programs, which are obtained through Apple's App Store, display the financial institution's online banking functions in a simplified format that's typically more intuitive and user-friendly than that of a traditional Web site. Such apps are usually free and though many are optimized for the iPhone's smaller screen, more and more banks are now releasing iPad 2-specific apps, including Bank of America, Chase and Citibank.

The iPad 2's online banking apps offer much of the functionality that you'd expect from a Web site, plus a few more innovative features. Like their browser-based counterparts, these apps allow you to check account balances, view recent transactions, transfer funds and pay bills. More advanced tasks are possible, thanks to the iPad 2's global positioning system (GPS) and camera. Most banking apps can use GPS to pinpoint your location and find the nearest bank branch or ATM. They also give the business hours and services provided at these outlets, as well as driving directions on the iPad 2's Maps application. Some banking apps also allow you to deposit checks remotely. While the process varies from bank to bank, you generally sign in to your online account app, then select the deposit option. When prompted, you enter the deposit amount, then take a picture of both sides of the endorsed check. After you accept the deposit, the images are securely sent to your bank over the iPad 2's 3G or Wi-Fi connection. After the account name and number on the check are verified, the funds are credited to your account.

Managing your finances with the iPad 2 clearly represents a significant advancement over traditional banking. Read on to find out more about the pros and cons of this technology and exactly how secure it is to use.

The Advantages of Online Banking with an iPad 2

There are several advantages to banking on your iPad 2 over your computer or smartphone. Computers are bulkier and usually must be within range of a Wi-Fi network to connect to the Internet. iPad 2s, on the other hand, are lightweight and slim, and their optional 3G connectivity allows them to surf the Web anywhere there is cell phone service. The iPad 2's touch screen also makes online banking more portable, eliminating the need for extra equipment like a mouse and keyboard. While smartphones are similarly convenient, their small screens can make navigation more tedious and information harder to read. This can be a problem when you're trying to review financial tools like recent transaction tables and budgeting charts.

So what makes the iPad 2 more desirable for online banking than other tablets on the market? One reason is the availability and quality of its apps. In September 2011, the information technology research firm Gartner projected that the iPad will account for 73.4 percent of worldwide tablet sales for that year [source: Gartner]. That means that online banking developers are focusing most of their energy on apps for Apple's iOS operating system instead of the less common Android, Blackberry Tablet OS and Windows 7 platforms. Therefore, online banking apps for the iPad 2 are generally more widely-available and thoroughly-tested than those of their competitors.

Security, a key concern for online banking customers, is another advantage of the iPad 2. All banking Web sites and apps use encryption -- or the encoding of sensitive information in such a way that makes it difficult to steal -- to protect data transmitted over the Internet. However, this is just one aspect of the iPad 2's security features. Apple's App Store is very selective about what apps it will distribute, largely eliminating the threat posed by malware. More common on PCs, these harmful programs have the potential to disrupt a computer's operation, gather a user's personal information, or take possession of a computer's resources to send spam or perform other hostile tasks. Even if such a program were installed on an iPad 2, the operation system heavily restricts the actions that the software can perform, therefore reducing the chance that a program might, for example, steal your account information without your knowledge. Despite this tough security, experts still suggest that you password protect your device and avoid sending sensitive information over an unprotected Wi-Fi connection.

Given the convenience, increased features, and improved security offered by online banking -- particularly on devices like the iPad 2 -- more people are certain to trade in their teller for a tablet in the coming years.

The popularity of online banking applications is rapidly increasing. According to the digital marketing research firm comScore, 10.8 million Americans accessed their bank, credit card, or brokerage account through a mobile device application in the last three months of 2010, up 120 percent over the same period the previous year [source: comScore].

How Trusts Work
How to Become a Frugal Traveler
How are mortgage rates determined?