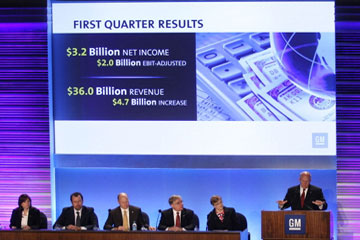 Interestingly, not all corporations decide to have public shareholders. Corporations can choose to be privately or publicly held. In a privately held company, the shares of stock are all owned by a small group of people who know one another. They buy and sell their shares amongst themselves. A publicly held company is owned by thousands of people who trade their shares on a public stock exchange.

Trying to please thousands of anonymous shareholders is a difficult task for any corporation. So why do they do it? The main reason that companies choose to issue stock to the public is to raise a large quantity of investment capital quickly through an initial public offering (IPO). The corporation might sell one million shares of stock at $20 a share to raise $20 million in a short amount of time (that's a simplification, however -- the brokerage house in charge of the IPO will extract its fee from the $20 million). The company then invests the $20 million in equipment and employees.

But what do the shareholders get out the relationship? If the corporation chooses to pay an annual dividend, then shareholders will receive a cut of the profits every year. Very few young companies issue dividends, however. They're more likely to issue growth stocks, in which all of the profits are reinvested. In this case, shareholders are banking on the fact that the right corporate management will help the company grow and generate even more profit. It's this potential for future success that will help determine the stock price on the open market. And if the shareholder holds onto a growth stock for long enough, he could eventually sell it for a significant gain.

We'll take a closer look at the market forces behind stock prices in the next section.