Browse the article Can one bad investment wipe out an entire portfolio? 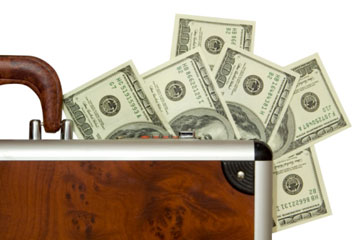 Investing can be scary, but can just one bad investment ruin your entire portfolio?
Hemera/Thinkstock

In times like these, when bankers are going to jail and your neighbors are losing their homes, it's human nature to worry about making one wrong move with money.

Stories of people who have lost millions in assets are flooding the media markets. And yes, some of those people lost their money on just one bad investment decision. But in general, these investors bear little resemblance to typical Americans who work for respectable companies. In two famous instances, those who lost everything made investments with an "all-in" approach.

Many investors with financier Bernard Madoff placed all their retirement funds into a Ponzi scheme on the promise of substantial gains [source: Zambito and Smith]. In another example, at the bidding of their bosses, employees of Enron, the giant Texas energy company, tied their retirement funds to the company's stock. When stock prices started plummeting on the news of accounting irregularities, the employees could not sell. Ultimately, they lost their jobs and their nest eggs, which they had placed so precariously into a single company's basket [source: Calkins].

But what are your chances of losing everything with just one wrong move? Read on for reassurance.

Unlike those involved in the huge, fraudulent schemes that hit the media, the everyday American working for a typical company is less likely to lose everything in one shot. Even a cursory reading of investment guides can prevent catastrophic errors.

The guidelines are simple: Put only 5 to 10 percent of your money into the riskiest investments. Don't invest in financial schemes too complicated to understand. Don't trust returns that sound too good to be true. And don't take the word of a single source on the potential return for any single investment [source: Tyson].

"You've got to do your research," says Eric Tyson, author of "Investing for Dummies" and "Personal Finance for Dummies." "If you only listen to talk radio recommendations without independent verification, you can get into trouble."

Tyson has met people who have paid thousands of dollars for seminars on how to get rich on real estate. They could have saved all that money, he says, if they had paid for a couple of hours with a certified financial planner.

Before sinking a significant amount of money into any investment, be sure to talk to a variety of experts, not just one. To be safe, stick to the 5 to 10 percent rule, and it's highly unlikely that just one bad investment will destroy your entire portfolio.

For more tips on investing, click to the next page.