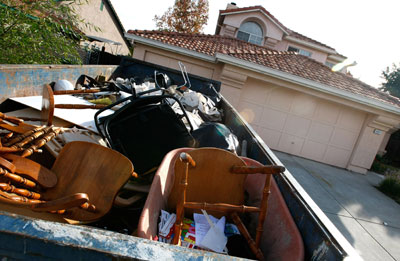 A Dumpster is filled with furniture and personal property in front of a vacant home in October 2007 in Antioch, Calif. California ranks third behind Ohio and Michigan ­in foreclosures.
Justin Sullivan/Getty Images

The foreclosure process differs by state, but we can take a look at the general steps that are taken. If you're faced with foreclosure, it's important that you research your state's laws and practices.

Foreclosure proceedings can begin after a single missed payment, but it isn't very likely. Most banks and lenders have a grace period for late payments, usually with a fee added on. It typically takes being a full 30 days late for the alarm bells to go off. After the second missed payment, you'll be getting some phone calls. Many lenders will only accept both late payments to bring the loan current. They also may refuse any partial payments.

Once you fall three months behind, things get serious. This is typically when most lenders will begin the foreclosure process in one of two ways: judicial sale, which requires that the process go through the court system, or power of sale, which can be carried out entirely ­by the mortgage holder.

All states allow judicial sale, while only 29 allow power of sale. If your state allows power of sale, the loan papers will usually have a clause that says this method will be used. Power of sale is typically faster than the judicial route. Let's look at both methods.

Both types of foreclosure require that any other involved parties be notified of the proceedings. For instance, if the homeowner took out another loan against the house with a third party, that lender must be contacted and its loan amount must be paid from the auction's proceeds. If the third-party lender isn't paid, it can apply the mortgage to the new property owner. Many times, the lender will actually buy the property back and attempt to sell it through the real estate market at a later date.

There's one more type of foreclosure that's almost completely obsolete, called strict foreclosure. In these cases, once judgment is made on the lawsuit, the property is automatically assumed by the mortgage holder. Only Connecticut and Vermont still allow this practice [source: Realty Trac].

In the next section, we'll give you some tips to help you avoid foreclosure.