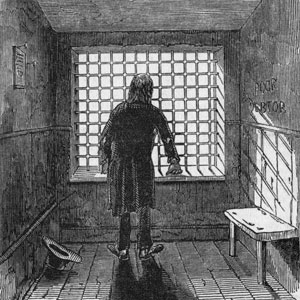 Debt Pictures Inmates at this London debtors' prison in the 1800s were allowed to beg passers-by for money through the grate in the wall. See more pictures of debt.
Hulton Archive/Getty Images

Debtor's prisons were abolished in the United States in 1833. Until that time, failure to pay what you owed could and did land you in jail. And debtor's prisons added a nice touch -- not only were you forced to pay your debt, but you were also forced to pay your prison fees. The question was, how? These prisons didn't allow work release, and prisoners didn't print license plates, so once in the lock-up, debtors were almost solely dependent on family or friends (or hidden funds that took imprisonment to shake from their pockets) in order to pay the bill -- sometimes less than a dollar.

And while waiting for payment to drop from the sky, debtors could look forward to accommodations that toed the line between a jail and a dungeon. In 1736, a Maryland committee described the local debtors' prison as, "A place of restraint and confinement [that] has also been a place of death and torments to many unfortunate people" [source: getoutofdebt.org]. Not least among the torments was typhoid fever, which did wonders for the overcrowding of 18th- and 19th-century jails.

One of these unfortunate, incarcerated debtors was Robert Morris, who loaned the fledgling U.S. government $10,000 during the Revolutionary War. After land speculation went south, he defaulted on loans and landed in Philadelphia's Prune Street Prison.

Obviously, this tough-on-debt approach was supposed to deter people from taking on debts they couldn't repay. Unfortunately, it didn't work. In a 1758 letter titled "To The Idler," the English author and essayist Samuel Johnson wrote:

"We have now imprisoned one generation of debtors after another, but we do not find that their numbers lessen. We have now learned that rashness and imprudence will not be deterred from taking credit; let us try whether fraud and avarice may be more easily restrained from giving it." [source: SamuelJohnson.com]

In other words, Johnson gave up on punishing users and recommended refocusing on suppliers. This kind of thinking eventually led to a national bankruptcy law in 1802 (springing Robert Morris from Prune Street), and the establishment of the Federal Trade Commission in 1914, which was -- among other things -- supposed to protect consumers from predatory lending practices that would result in impossible debts [source: FTC].

The irony in that last sentence makes a nice transition into the question of whether debtors' prisons really still exist. 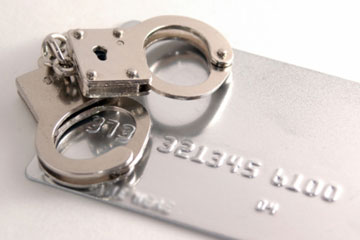 Credit card debt can land you in jail -- especially if you miss your court date.
©iStockphoto.com/Thinkstock

You can still go to prison for your debts.

The easiest and most direct way is by failing to pay certain kinds of debts, including child support, alimony or release fines. This is because by failing to pay, you've violated a court order -- it's not the debt that lands you in jail, but noncompliance with an order of the court. Again: It's not a crime to owe money, but it is a crime to thumb your nose at a court order of any sort [source: StarTribune].

These court orders are fairly common in situations of finances gone south. In fact, debt collection agencies are wise to the power of court orders and may seek one as tool to force debtors into repayment. If you're summoned to court to discuss your debts, don't miss the hearing -- failure to show can land you in jail, as can failure to pay the amount ordered by a court.

Take the case of Joy Uhlmeyer, reported in the Minneapolis Star Tribune, who was pulled over and arrested while driving home from visiting her elderly mother. After Uhlmeyer spent 16 hours in process, including a sleepless night in a holding cell, police explained that her offense was missing a court-ordered hearing about a credit card debt.

Another possible way of ending up in jail for nonpayment is by letting your car insurance lapse. If you're going to drive, the law requires that you have car insurance. If not, you can be jailed.

But if you ever start feeling like the United States' debt laws have taken a turn for the tough, compare them to Dubai, where in 2009 the AP estimated that 40 percent of the prison population was jailed for defaulting on debt [source: Surk]. The country offered a perfect recipe for packing debtors' prisons: easy credit, jail for default and a boom-then-bust economy that saw the financial carpet whisked out from beneath many people living lavish lifestyles. The New York Times reports that in February of 2009, more than 3,000 cars sat at the Dubai airport, abandoned by debt-ridden foreigners fleeing the country rather than facing debtors' prison [source: Worth].

How to Get a Tax Deduction Due to Bad Debt
How to Claim a Casualty Loss Deduction
How Are Lawsuit Settlements Taxed?