Public Debt and the Economy 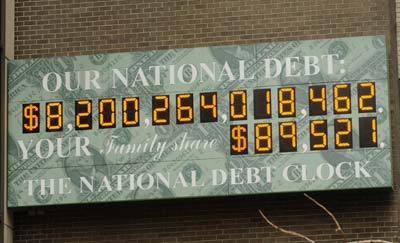 The National Debt Clock at 1133 Avenue of the Americas and 44th Street, March 26, 2006, in Manhattan.
STAN HONDA/AFP/Getty Images

The deficit is the difference between how much money the government takes in through taxes and how much it spends each year. The public debt is the same as the national debt, and it's the accumulation of all of the deficit, plus any other money the government spent that wasn't part of the budget. The United States public debt is currently well over $9 trillion. (You can look up the exact public debt at the ­U.S. Bureau of Public Debt­.) In 2006, the interest alone on the national debt cost U.S. taxpayers $405 billion [source: CBS News].

Intragovernmental holdings -- the other $4 trillion -- are treasury securities that the U.S. government buys itself to bolster huge federal savings programs like Social Security, Medicare and Medicaid.

Obviously, the United States is not alone in holding a large national debt. But a better indicator of a nation's indebtedness is the ratio of its public debt to its GDP, or total national income. The U.S. public debt ratio in 2005 was calculated as 61.8 percent of the GDP. In the same year, the UK's ratio was 46.7 percent, France's was 76.1 percent and Japan's was an astonishing 173.1 percent [source: OECD].

But how does the public debt affect the economy as a whole? Is a large public debt an indicator of bad economic times to come? The United States Government Accountability Office (GAO), says that a rising national debt, particularly when viewed as a percentage of a nation's GDP, is a big problem, although a long-term one.

The GAO explains that the more debt a country holds, the less money it's able to put away in savings and reinvest in the nation's economy. In the United States, in particular, the Social Security, Medicare and Medicaid savings accounts are going to be hit hard by the retirement of the Baby Boomers. The government will no longer be able to tap into these accounts to pay for other federal programs. The GAO also warns that federal borrowing to pay off the deficit will inevitably lead to higher interest rates, affecting the ability of citizens to buy homes and take out loans. That could lead to a broader economic slowdown, or even recession [source: GAO].

For more information about debt, money and related topics, follow the links below.­ ­

Who Owns the National Debt?

The top foreign purchasers of U.S. debt are: