Consumer Debt and the Economy 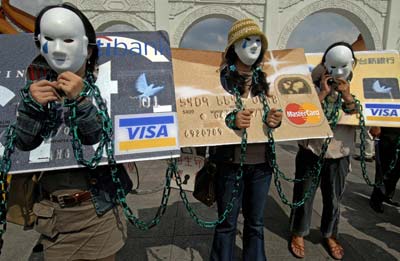 Local consumers who are in credit card debt, referred to as 'credit card slaves', take part in a demonstration calling for the government to pass a law to help people oweing money to banks, June 2, 2007, in Taipei.
SAM YEH/AFP/Getty Images

But the DSR doesn't include mortgage or rental payments. Those numbers are calculated in a figure called the financial obligations ratio (FOR). The latest figures from the Federal Reserve have homeowners spending 18 percent of their income on debt and renters spending 25.9 percent.

Americans aren't the only ones up to their neck in consumer debt. According to 2005 statistics from England, British citizens owe an average of $6,500 in unsecured debt (primarily credit cards). That's over twice the European average of $3,200. In Greece, unsecured borrowing rose 29 percent from 2001 to 2005, and new lending has jumped 52 percent in Turkey over the same time period [source: BBC News].

On the flip side, around 70 percent of the United States and British GDP is fueled by consumer spending [source: Money-Zine.com]. A nation's GDP is often used as a measurement of the health of its economy. Consumer debt begins to negatively affect the health of the economy when it forces consumers to spend less. This is why some governments do everything they can to encourage consumer spending (and borrowing), including lowering taxes and lowering interest rates. If consumers spend less, the economy is said to have stalled, possibly leading to a longer-term recession.

Complicating the matter is that the United States is entering a housing crisis (see How Subprime Mortgages Work), which will only make consumer debt problems worse. The UK already experienced this exact situation. The UK housing boom (and resulting slump) happened 18 months ahead of similar economic developments in the States. Since the end of 2005, British credit card delinquencies have risen 50 percent, causing banks to lose billions of dollars [source: Fortune]. According to a recent survey, credit-crunched homeowners in the UK are even beginning to use their credit cards to pay off mortgages, a dangerous economic precedent that will only lead to deeper debt and more defaulting on credit card payments [source: Fortune].

A big fear of United States economists is that the economy could be entering a powerful recession equal to the 13-year Japanese economic crisis of the 1990s, also sparked by the collapse of the credit market [source: TheStreet.com].

On that cheery note, let's look at public debt and its effect on the economy.