How to Get Out of Debt 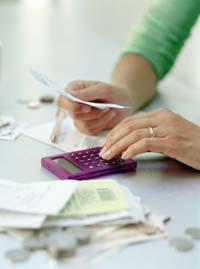 The easiest way to get out of (and avoid) debt is to budget.
Digital Vision/Getty Images

The simplest way to get out of debt -- and for many the most difficult -- is to budget your spending and save enough cash to pay off your debts.

A budget is a financial plan that allocates a specific amount of money to be spent on certain commodities like food, clothing, mortgage or rental payments, entertainment and savings. Here's how to use a budget to lower your overall debt:

Credit counselors are trained professionals that can help a chronic debtor come up with a manageable budget, develop a "debt management plan" and even negotiate with creditors for lower interest rates or better loan terms. However, not all credit counseling services are legitimate. Some of them charge hidden fees, called "voluntary contributions," that can quickly get expensive. Others are able to win lower interest rates only after purposefully defaulting on all of your loans and ruining your credit score.

If you find yourself up to your neck in debt with no possible way out, there are two final options: debt settlement and bankruptcy. Debt settlement is an arrangement between a debtor and a borrower to pay one lump sum to satisfy the debt rather than monthly payments that incur interest. This lump sum is typically less than the total debt that is owed. It's important that debtors know their rights when negotiating with creditors. In the United States, these rights are established by the Fair Debt Collection Practices Act.

The only advantage of debt settlement for the creditor is that he will at least receive some money. If the debtor is allowed to declare bankruptcy, the creditor may receive very little or nothing. Declaring bankruptcy is a legal process in which the debtor's assets are turned over to a trustee who then liquidates the assets to pay off the various creditors.

In the United States, the most common type of personal bankruptcy is called Chapter 13, in which the debtor retains some assets -- like a home or car -- and is required to adhere to a court-ordered debt repayment plan in which a percentage of his regular income is used to pay off creditors. After the debt repayment is completed, the debtor receives an official discharge clearing him of any further obligations to his creditors.

Now let's look at consumer debt and its effect on the overall economy.