How do you calculate disposable income? 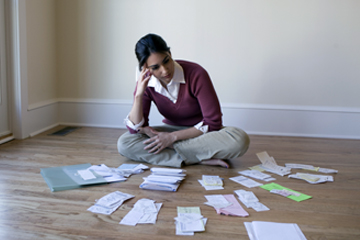 Disposable income is the biggest factor in determining a debtor’s ability to repay creditors.
David Sacks/Thinkstock

Disposable income — the amount of money you have after taxes — is at the center of your personal financial health and plays a crucial role in bankruptcy filings. Calculating disposable income is also a determining factor in whether you qualify for Chapter 7 or Chapter 13 bankruptcy, and each type has different requirements [source: Investopedia].

A Chapter 7 bankruptcy filing is usually preferable, because it allows for most debt to be forgiven. If you don't qualify for Chapter 7 your filing may be converted to Chapter 13, an alternative that requires the repayment of debt during a three- to five-year period.

To qualify for Chapter 7, your gross annual income during previous six months must fall below the median income for a same-size family in the state in which you reside. This income includes not only your wage earnings, but also other regular contributions to household expenses from others, such as monetary gifts from a parent. If you're married, the income of your spouse is included in the gross annual income if filing jointly for bankruptcy. Any income received from Social Security or as the result of restitution ordered by the court to crime victims is exempt from inclusion.

If your income is more than the median income for the state, disposable income will be calculated using a "means test." This formula subtracts expenses and allowable deductions from your gross income. If the remaining disposable income indicates the ability to repay even a few of your debtors, the case may be converted to a Chapter 13 [source: U.S. Courts].

The court also will consider a forecast of your income and expenses in the first few months after you file for bankruptcy, including income you have earned but not yet received on the day you plan to file. If this forward-looking disposable income assessment determines you can pay $200 or more to your debtors each month, the court may determine Chapter 13 is a better option. It will also determine which debtors will be paid and how much they will be paid; any leftover debts are forgiven.

Disposable income is the biggest factor in determining a debtor's ability to repay creditors, but the court also takes additional circumstances that may affect a debtor's ability to pay into consideration. These can include dramatic changes in income or ongoing medical expenses, and the court may make exceptions to the calculation of disposable income on a case-by-case basis [source: Csiszar].

How Tax Credits Work
How much does it cost to raise a child?
10 Tax Tips for the Recently Divorced