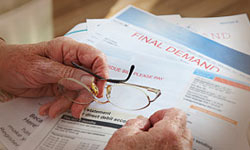 More than half of all Americans have some kind of debt.
Andrew Bret Wallis/Getty Images

According to a 2010 Gallup survey, Americans identify terrorism and government debt as the two most worrisome issues to American wellbeing [source: Saad]. If Americans are so concerned about the government's debt, why aren't we worried about our own debt? More than half of Americans are in debt and paying interest on it. Many blame credit cards -- and rightfully so; they are a major culprit. But there are a number of ways people rack up debt. Read on to see 10 ways we accumulate debt.