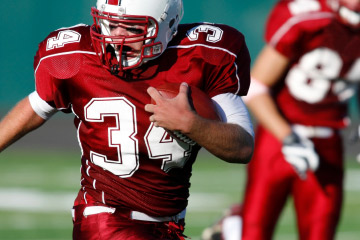 An athletic scholarship requires prowess on the field and in the classroom.
©iStockphoto.com/filo

Unlike the individual scholarships we just discussed, which usually come from outside sources, most money for athletic scholarships comes directly from the schools' athletic departments. Universities budget a certain amount of money for attracting top athletes, and athletic grants exist for all kinds of sports, not just basketball and football. There are literally hundreds of athletic grants for golf, for instance, plus many more for uncommon sports, such as fencing and water polo. Coppin State University in Maryland even offers a grant for weight lifting.

Athletics at the university level in the United States are divided into three divisions. Division I, which mostly includes large schools with intense sports culture, offers the most money to their athletes, but also demands the most time and commitment in return. Division II sports are mostly smaller schools with less money for a large athletics program but still playing at a highly competitive level. Division II athletes are more likely to get supplementary scholarships rather than free rides, but there's also less pressure on the field. Between Divisions I and II, 126,000 athletes in the United States receive about $1 billion every year [source: Nitardy]. Finally, Division III sports have the least funding and don't award athletics scholarships. Financial aid packages can be more generous for athletes applying at Division III schools, but in general, Division III athletes are in it for the love of the game.

The application process for a sports scholarship is a little different from other scholarships, partly because coaches are actively interested in recruiting new and talented athletes. Rather than waiting for applicants, every year coaches send out mass recruitment mailings to players who appear in all-regional rankings national lists. Many athletes get recruited just by writing a letter to a coach at the school of their choice or sending in a performance DVD.

However, there are many factors that go into the selection process for an athletic scholarship. Colleges look not only for talent on the field, but for players who will excel academically. Many incoming athletes end up having to adjust their expectations when they find they're no longer big fish in small ponds. It's not uncommon for freshman to be benched for an entire year to train while they wait for a spot to open up on the starting lineup.

Forty years ago, only 1 in 27 girls played high school sports. College athletics for women were few and far between, not to mention athletic scholarships and funding. Title IX, which was passed in 1972, leveled the playing field by requiring that athletics money be split equally between men's and women's sports. In many cases, this meant cutting men's programs to enforce fairness, especially in Division I schools that were heavily invested in high-profile college sports like football and basketball. However, while this meant an enormous windfall for women's athletics scholarships, even today we have yet to achieve parity -- male athletes still receive $136 million more than females in NCAA college athletics scholarships [source: Title IX info].