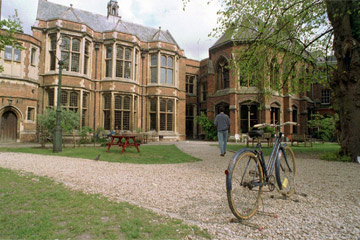 Ask most college seniors what they want to do after graduation, and most of them won't tell you that they're looking for a few more semesters of intense study at a school far from home, family and friends. But each year, for hundreds of college students around the world, that's the goal. Those extremely motivated students spend most of their college careers working to become Rhodes Scholars.

When most people think of scholarships, they think of programs that help pay for undergraduate work. However, the Rhodes Scholarships pay for post-graduate work at the University of Oxford, in England. It's one of the most exalted and selective academic honors a student can achieve, and past Rhodes Scholars have gone on to some incredible accomplishments. If you think you have what it takes to be a Rhodes Scholar, or if you just want to learn more about one of the world's highest academic honors, keep reading.

Part of Rhodes' goal in bringing students from all over the world to Oxford was to introduce them to and give them an affinity for English life. In 1964, The Kennedy Scholarships were established with a similar goal. Kennedy Scholarships follow a process and selection criteria very similar to Rhodes Scholarships, but are open to British students and provide funding for study at Harvard or MIT.

How to Win a Rhodes Scholarship

While the number of countries in the Rhodes Scholarship program has expanded, the basic criterion hasn't. The goal of the Rhodes Scholarships isn't just to find people who are good students now; rather, the selection committee tries to evaluate an applicant's potential over a lifetime. As a result, applicants are judged not only by what they've accomplished, but also by what they're likely to accomplish later in life.

Cecil Rhodes set out four standards for selecting Rhodes Scholars. He stated that applicants should be judged on literary and scholastic achievements, vigor (as shown through participation in sports), devotion to service to others and leadership abilities.

Because Rhodes Scholarships are so prestigious, many colleges and universities in the United States encourage their top students consider applying almost as soon as they arrive on campus. In order to win the scholarships, students must be nominated by their college or university. From there, district selection committees (there are 16 Rhodes districts in the United States) examine a student's application materials and the applicants undergo a series of formal and informal interviews. Each November, the winners are announced and the recipients enter Oxford the following October for two years of study.

With 32 Rhodes Scholarships awarded in the Unites States each year, competition among colleges to produce Rhodes Scholars is fierce. Currently, Harvard has had the most Rhodes Scholars, with 313. Among public colleges and universities, the University of Virginia has produced the most, with 45 [source: Willen]. 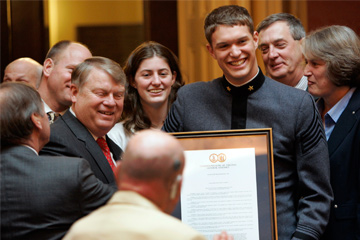 Rhodes Scholarship recipient, VMI cadet Gregory Lippiatt, holds a resolution honoring him on the floor of the Virginia House of Delegates at the Capitol in Richmond, Va., on Feb. 11, 2009.
AP Photo/Steve Helber

Oxford is very different from most American colleges and universities. For one, it's made up of 38 colleges. Each college has separate admissions. In fact, winning a Rhodes scholarship is no guarantee that a given college at Oxford University will accept you. Also, while most American schools use classroom discussions, at Oxford, much of the instruction is one-on-one, with students working with a tutor in a particular area. The tutor assigns readings and an essay on a particular topic, and the student and tutor meet to discuss the assignments. Finally, whereas at American schools, the same person teaches and gives tests, at Oxford, the tests are given by a university Board of Examiners, not the student's tutor. The result of this system is that the tutor and student work in partnership to prepare for exams.

Rhodes scholars are allowed to study any subject they choose, so as you can imagine, the courses that Rhodes Scholars have taken are extremely varied.

So, who are these Rhodes Scholars? Well, you've probably heard of at least a few Rhodes Scholars, even if you didn't necessarily know they were prior to reading this. Former U.S. President Bill Clinton was one, as is Rachel Maddow, host of the Rachel Maddow show on MSNBC. Louisiana Governor Bobby Jindal is a Rhodes Scholar, too, and so is actor and musician Kris Kristofferson.

Former Senator and NBA star Bill Bradley was also a Rhodes Scholar. Like Bradley, Myron Rolle, a defensive back and sixth-round draft pick in the 2010 NFL draft, proves that Rhodes Scholarships aren't just for people who spend all day in the library. Since the selection criteria call for vigor demonstrated through participation in sports, athletes tend to do quite well.

For more information about Rhodes Scholarships and other related topics, follow the links on the next page.

Former U.S. President Bill Clinton was a Rhodes Scholar, but he didn't complete the degree he set out to earn at Oxford. In fact, he didn't get a degree from Oxford until 1994, when the university awarded him an honorary doctorate.