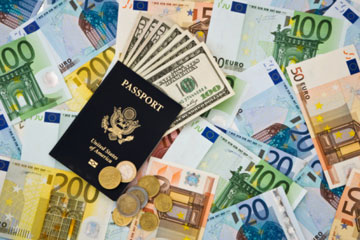 The Fulbright Scholarship pays for students to go abroad for research or study -- all for the goal of increasing international understanding.
Dennis Flaherty/Photographer's Choice/Getty Images

During World War II, Sen. William J. Fulbright, who would go on to distinguish himself in the area of international affairs, sponsored a bill that he hoped would eventually strengthen foreign relations. He wanted to give Americans and citizens of other countries an avenue for exchanging ideas, participating in cooperative education and building a mutual understanding among one another [source: IIE]. His piece of legislation, the Fulbright Act, was written in 1946, when the United States was exporting goods and supplies in support of the war effort. Fulbright's plan was for revenue from this surplus war property to fund new educational programs where participants from around the world could conduct research, exchange ideas and work together to solve problems on a global scale.

Today, the Fulbright Program is considered the largest and most prestigious educational exchange program, providing recent college graduates, graduate students and young professionals the opportunity to continue their education or professional development through research and study in a foreign country [source: IIE]. As of 2009, there have been more than 294,000 Fulbright scholars since the program was introduced; approximately 111,000 of which were from the United States [source: U.S. Department of State: About]. Each year, around 7,500 grants are awarded to students in more than 100 countries to conduct research on topics ranging from microfinance to the influence of pop culture in emerging economies [source: U.S. Department of State: Alumni].

The Fulbright Program is extremely competitive, and scholarships are awarded in nearly every field, from science to the performing arts. The program is open to anyone interested in applying, but recipients are chosen based on merit, professional and academic achievement, and the ability to represent their countries and cultures.

There are two primary Fulbright Scholarship programs: the Fulbright U.S Student Program, which grants awards for U.S. citizens to study abroad, and the Fulbright Foreign Student Program, which awards scholarships for students from other countries to study in the United States. Both scholarships are awarded for one academic year, but in some cases, may be renewed upon completion of the first term.

In the next section, we'll look at who is in charge of the Fulbright Program and how it's funded.

For U.S applicants, there are three types of Fulbright Scholarships, each of which are typically awarded for one academic year. The first type is the Study/Research Grant. Recipients of this scholarship plan their own projects, which may include coursework, lab research or work in the creative or performing arts.

The second type of Fulbright Scholarship is the English Teaching Assistantship, or ETA. The primary focus of the ETA is to engage students in the classroom, and it doesn't require a significant research component. ETA participants typically work in schools where they can strengthen the students' language abilities and knowledge of the United States.

Finally, there are Travel-only Grants, which are available only in Italy, Hungary and Germany, and are designed to be used with other scholarships that may not provide for international travel. These can also be used to supplement a student's own contributions to a particular study or research project.

In addition to these three grant categories, there are also special study and academic focus areas in music and culture, critical languages, business, and journalism.

Up to four Fulbright/mtvU Awards are available for students interested in projects about the influence of popular music in a particular culture. For example, 2009-2010 winner Tina Wadhwa went to India to create a documentary on influence of Bollywood music on the youth of Mumbai [source: Fulbright mtvU].

The Critical Language Enhancement Award gives recipients the chance to receive language training in select countries. These awards are designed for three- or six-month periods and are used to supplement other study or research grants.

Fulbright Business Grants are available in Australia, Mexico, the Netherlands and Spain, and recipients study a broad scope of economic policies ranging from business and maritime law to the effects of the North American Free Trade Agreement (NAFTA) on Mexico.

Fulbright Journalism Grants are available in Germany, the United Kingdom and Taiwan, and they may come in the form of professional internships for recent graduates or graduate-level coursework in fields related to publishing, radio, TV and new media.

And because this is an exchange program, the Fulbright Foreign Student Program is the other key component. Nearly 2,000 foreign Fulbright scholars come to the United States each year for graduate-level or doctoral study, bringing cultural perspective to their campuses and gaining insight into American culture that they can take back to their home countries [source: IIE].

The IIE is interested in selecting the best and brightest to participate in the Fulbright Program, so standards are high. We'll discuss the competitive aspect in more detail on the next page, but for now, we're going to explore some baseline requirements that must be met in order to apply.

All applicants, regardless of their country of origin, must meet citizenship requirements as outlined by the Fulbright Commission and hold a bachelor's degree before the scheduled grant start date. If applicants have not completed their undergraduate coursework, they may still be considered if they have extensive professional experience or have distinguished themselves in the area of research or study they're proposing.

On top of these minimum requirements, preference for the U.S. Scholar Program is given to applicants that have completed their higher education in the United States. Foreign study as part of a student's curriculum doesn't count against an applicant, but having spent considerable time (generally six months) in the country in which an applicant is applying may be a disadvantage. The reason behind these restrictions echoes the origins of the original legislation, which was to increase understanding between Americans and the rest of the world. Placing scholars in countries with which they're already familiar limits the effectiveness of the exchange.

Just as there are minimum requirements, there are also factors that constitute ineligibility. Anyone who has already received a Fulbright Grant is ineligible, as is anyone who holds a doctoral degree at the time of application. Also, applicants seeking enrollment in a medical program abroad, or those who have resided abroad for five or more consecutive years in the six-year period before the application date, are ineligible.

Of course, these are some of the minimum requirements to just be eligible for a Fulbright Grant, but this is a highly selective award, and the gulf between eligibility and qualification can be significant. The number of available Fulbright awards varies from country to country, and so does the competition for these scholarships. Generally, Western Europe is the most competitive region -- nearly half of all U.S. Student Fulbright applicants base their proposals on visiting countries there [source: Hymas].

In the next section, we'll explore how interested applicants are selected to receive Fulbright Scholarships.

Collectively, Fulbright scholars have racked up 40 Nobel Prizes [source: U.S. Department of State]. Other notable Fulbright winners, sometimes referred to as "Fulbrighters," include the following recipients:

The journey from applicant to Fulbright Scholar is long, with months of preparation, research and planning that must happen before applications are even submitted. The entire process -- from completing the application to arriving in the host country -- lasts more than a year, and potential candidates should take this into consideration when deciding whether to apply. Also, because there are more applicants than grants available, the competition can be fierce.

The following information is for the 2011-2012 academic year, and even though deadlines may vary depending on campus and grant type, this should provide a glimpse into the process.

Beginning in May 2010, applications become available for submission in October. Five months may seem like a long time to get your packet together, but depending on the host country, area of study and program, you may need to provide additional information. For example, all applications require a project statement (up to five pages), a resume or curriculum vitae, and three letters of reference, but some programs also require a language proficiency report and a letter of invitation from the prospective host country. For a checklist of all requirements by grant type, visit the Institute of International Education Web site [source: IIE].

The IIE reviews the applications and schedules interviews with candidates they believe have the potential to be selected. These interviews are critical, because it's the only opportunity candidates will have to make their case in person.

By Jan. 31, 2011, the IIE will let applicants know whether they will receive a Fulbright Scholarship, have been named as an alternate in the event another winner declines or have been removed from consideration. Between March and July of 2011, the new class of Fulbrighters will complete a medical examination and submit final transcripts (if they're students).

Finally, starting in July 2011, scholarship winners begin working in their host country. The grant period ends in March 2012, which means the application process actually lasts longer than the grant itself.

As you can see, securing a Fulbright Scholarship can be a demanding process. But the opportunity to work and study in a foreign country, exchange ideas and learn from cultures that might otherwise be inaccessible may be worth the effort for the successful candidates.

Learn more about Fulbright Scholarships, financial aid and studying abroad by exploring the links on the next page.

The Fulbright Program adviser at Harvard College, Paul Bohlmann, offered these points to keep in mind during your committee interview: