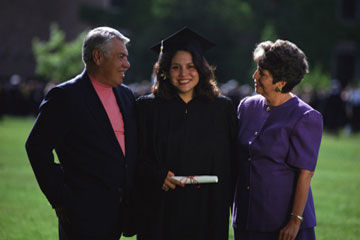 Wouldn't you like to put every available penny toward your child's college education? 529 plans don't limit income eligibility or account contributions.
Photolink/Getty Images

As we mentioned on the last page, custodial accounts (also known as Education Savings Accounts or ESAs) are a bit more rigidly structured than most 529 accounts. Here's one major example: Did you know you can't contribute to an ESA if you make more than $95,000 per year ($190,000 for married couples, as of 2012 [source: SavingForCollege.com]? Unlike ESAs, your income doesn't affect your eligibility to open a 529 account. In addition, most states don't limit contributions either, which is crucial for those who want to pass money to their children or grandchildren for school.

Contributions to 529 plans also qualify for the $14,000 ($28,000 for married couples in 2013) annual gift tax exclusion [source: Securities and Exchange Commission]. You can also contribute up to five years of gifts during the first year. This is a great benefit in situations where inheritance money enters the picture.

The contribution limits (the maximum you can put into the account) are very generous in most states, typically above $200,000. At the other end of the spectrum, you can contribute as little as $25 to $50 per month.