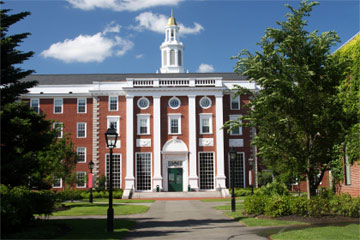 A business school like Harvard's, pictured here, can easily set a student back more than $50,000 per year in tuition, fees and living expenses.
©iStockphoto.com/DenisTangneyJr

The land of opportunity is also the land of entrepreneurship, the striving businessperson and, consequently, the business student. The United States leads the world with 661 business schools that are members of the Association to Advance Collegiate Schools of Business (AACSB International). France comes in second at 49 [source: AACSB]. At least 150,000 students earn MBAs in the United States each year [source: Boston Globe]. In 2009, 64.3 percent of U.S. MBA students were men; 35.7 percent were women.

But is an MBA worth the time, effort and expense? That depends on several factors, including whether you can handle the average cost of about $32,000 per year (many schools are more expensive) [source: Boston Globe]. It also depends on what the degree can do for your career prospects. When asked who was right for an MBA, Rose Martinelli, associate dean at the University of Chicago's Booth School of Business, told BusinessWeek, "everybody," because she considers the MBA a "generalist degree, meaning it's about learning how to manage people and resources" [source: Gloeckler]. Consequently, she and other educators advocate an MBA for anyone, from accountants to hedge fund managers to founders of nonprofit charities.

On the other hand, several small-scale studies have found that the value of an MBA, including the influence of highly ranked schools, is questionable, although most graduates report that they are happy with their degrees, even though their definitions of success vary widely [source: Ellin]. Many MBA programs collect data on the degree's aftermarket value in order to better promote their programs. For example, Harvard touts that, three months after graduation, the median base salary for a 2009 MBA recipient was $114,000. Further, 77 percent of students had accepted a job offer by graduation, and 87 percent accepted an offer within three months [source: Harvard Business School].

In this article, we'll cover all the bases of MBA programs, from applying, to attending, to paying for it. We'll also look at the various types of MBA programs, in particular using one prominent university's diverse offerings as an example. 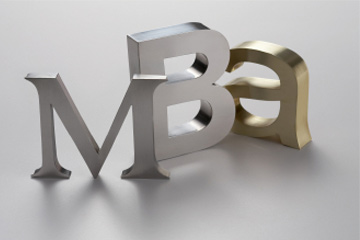 Adding those three expensive letters to your academic credentials starts with the application process.
©iStockphoto.com/Luso

With more than 1,000 business schools worldwide, you'll need to face the task of deciding which business school is right for you and drawing up a realistic list of schools to apply to [source: AACSB]. Resources are available to help guide your decision. For example, numerous ranking systems exist for MBA programs, and like the ubiquitous U.S. News & World Report college rankings, such rankings may attract controversy and debate. Even so, BusinessWeek Magazine's rankings are frequently cited as an industry standard.

Before you can apply to business school, you likely will have to submit to the standardized test. Around 1,900 of the world's business schools rely on the Graduate Management Admission Test, or GMAT, when considering applications [source: GMAC]. It's not designed to test your business skills but rather your problem solving, verbal and analytical writing abilities.

Administered by the Graduate Management Admission Council (GMAC), the GMAT costs $250 and can be taken at one of many test centers located in the United States and abroad. The score remains valid for five years. The GMAC offers free preparation software, but many prospective b-school applicants choose to purchase software, books or classes to help them study for the test.

In addition to taking the GMAT, you'll have to compile some other crucial application materials, such as college transcripts, recommendations, possibly several essays and other relevant documents. For that reason, keeping a spreadsheet may be the best way to stay organized and to know which materials go where and by what deadline. If you choose to apply to a combined program, such as a JD/MBA or MD/MBA, you will have to budget your time accordingly to complete the additional application materials.

You also should be prepared to travel to prospective b-schools to interview with admissions committees or to visit campuses to find the best fit for you. Because of the time, expense and paperwork involved, applying to business school is, at least for a time, a job in itself.

Lastly, keep in mind that business-school applications have skyrocketed since the beginning of the financial crisis [source: Gloeckler]. One Hong Kong-based program reported in late 2009 that applications were up at least 50 percent [source: Kolesnikov-Jessop]. For some prospective students, going back to school represents a way to escape a volatile job market -- or having no job at all. For others, it's a way to transition to a new industry or even a new country, such as by attending an MBA program abroad. Meanwhile, some schools offering part-time MBA programs are experiencing lower application numbers, due to applicant concerns about keeping their jobs while attending school and worries about whether sufficient on-campus recruiting exists [source: Gloeckler].

Types and Costs of MBA Programs

A full-time MBA program is quite costly, although many schools offer some form of financial aid, grants or scholarships. You may also turn to outside organizations for merit-based fellowships or to the government for a low-interest student loan. In some cases, particularly for executive MBA programs, employers will pay for part or all of an employee's MBA education.

The MBA at UCLA's Anderson School of Management is about $59,000 per year for a first-year student who's a resident of California. This amount includes room and board. A nonresident can expect to pay around $8,000 more [source: Anderson School of Management]. (This estimate, like many provided by universities, only covers the nine-month school year and not the summer break.)

You can find alternatives to the traditional, full-time, two-year MBA. For example, many highly specialized MBA programs have arisen. You could obtain an MBA in Wine Business from Sonoma State University. Some schools, like the University of Wisconsin, Madison, have eliminated their general MBA programs in favor of a raft of specialized programs or institutes. While these types of programs are rarely found at highly ranked schools, they can be very beneficial to people with specific career goals in mind. It's also a form of study that has long been a part of European MBA programs.

Let's look at one highly rated school, Duke's Fuqua School of Business, and its various options. Duke, of course, has a two-year full-time MBA program -- in this case, called a Daytime MBA, which costs about $50,000 per year for tuition, books and other fees. Factor in living expenses, and the cost rises to an estimated $66,728 for a first-year student who expects to graduate in 2011 [source: Fuqua School of Business].

Executive MBA, or EMBA, programs cater to businesspeople with extensive work experience -- often 10 years or more -- from around the world. These programs can be very expensive: Duke's runs more than $140,000.

Executive MBAs often require students to work independently, using lecture material distributed online. Duke's program is made up of five 16- to 19-week terms. Each term features 10 to 12 weeks of Internet-based course work, but the students will also find themselves attending classes together and collaborating in cities around the world.

So-called weekend executive MBA, part-time MBA or nondegree-granting MBA programs are designed to allow business professionals to continue working while taking classes at night and on weekends. Similarly, there are online MBA programs, which often require a great deal of writing and posting on communal message boards, on which students and professors interact and exchanges ideas and arguments.

Biz in a Tough Neighborhood

In 2009, the Moscow School of Management Skolkovo opened its 16-month MBA program with a focus on teaching students how to operate in emerging economies rife with corruption and bureaucratic ineptitude. 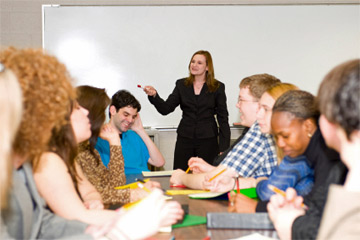 Depending on the type of program, the amount of time you spent obtaining your MBA can vary widely -- from nine months to more than two years or longer if you go part time.

Unlike, say, British universities, U.S. business schools generally mix collaborative group work with lectures from experienced professors. The structure of your program will vary depending on the school, and your school's curriculum and teaching style should be a factor in your decision to attend. Perhaps, for example, you'll find yourself attracted to Wake Forest University's MBA program because they teach core concepts that are used in multiple classes. On the other hand, that integrated approach, combined with Wake Forest's assigning students to six-member "learning teams," may not be as appealing to you if you prefer to work independently [source: Rinehart].

In any case, expect a lot of reading -- more than you can handle, many b-school alumni say -- and to be quizzed on anything assigned. Not unlike college or even law school, MBA programs value and attempt to instill time-management skills in their students, often by assigning workloads that seem unmanageable. Some schools, like Penn's Wharton School of Business and Berkeley's Haas School of Business, use traditional letter grades, along with the familiar four-point grade point average system. Others, like Emory's Goizueta School of Business, use proprietary systems; Emory, for example, offers grades of (beginning with the best) Distinction, High Performance, Performance Standard, Low Performance and No Credit [source: Emory]. Some courses at these and other schools may be graded as pass/fail.

Although business programs, of course, focus on inculcating their students with business, entrepreneurial and financial skills, some schools now provide the sort of critical thinking and multicultural studies commonly found in liberal arts programs [source: Wallace]. The shift from discipline-based classes like accounting or marketing hasn't caught on everywhere, but it's not uncommon now to find classes like "Critical and Analytical Thinking" offered alongside others about hedge funds and high finance.

As a consequence of the Great Recession, some schools have beefed up their offerings of courses on corporate responsibility and leadership, including using examples from other cultures and countries. U.S. business schools are also forming partnerships with schools from abroad, such as one between UCLA and the National University of Singapore. Similar agreements exist between schools in the U.S. and those in Hong Kong, China and India.

For more information about business school, higher education and other related topics, take a look at the links on the next page.