Do college admissions officers value students who speak more than one language? 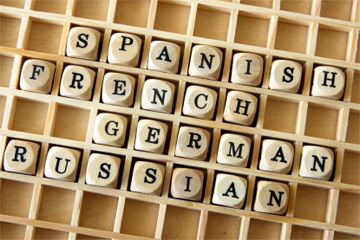 Parlez-vous francais? If you answered as easily as a native Frenchman, your college application could stand out a little more from the rest of the applicant pile. See more college pictures.
©iStockphoto.com/Mellimage

When Emily was a junior in high school, she got her hands on a copy of Jacques Steinberg's "The Gatekeepers," a book about the admissions process at Wesleyan University, a premier, private U.S. college. When Emily finished reading the story, which follows a group of applicants through their senior year of high school, she was deflated.

"Thanks a lot," she said to her parents. "We don't have a unique ethnic background, you didn't make me learn how to play an obscure instrument and no one in the family has had a life-threatening disease. I'll never get into college."

She was a good student with strong SAT scores. She also played sports, edited the school newspaper and had her eye on Georgetown University.

Meanwhile, Andrew, also an academically strong and active student with a gift for languages, spent his summers traveling to French-speaking African countries and began learning Arabic. Like Emily, Andrew also hoped to go to Georgetown.

Andrew got in, but Emily was denied admission. Did Andrew's foreign language skills give him the edge, or was he admitted for some other reason?

We can start to answer that question by looking to the decision makers. Admissions officers are faced with the task of narrowing the pool of applicants to those students they believe will succeed in college -- and beyond. They're also charged with the responsibility of building a diverse class of students, all of whom should be the "right fit" for their particular institution. They base their decisions on more than the requisite transcripts and test scores. Yet, transcripts and test scores, the key elements in all college application folders, may stand out more if a student has studied a second language.

In this article, you'll learn how studying a foreign language can pay off in the college application process in ways that you may not realize, and you'll see the more obvious benefits of speaking more than one language in the real world.

The Advantages of Learning a Second Language

First, let's talk about the less obvious academic benefits of learning a second language. According to the Center for Applied Linguistics, learning a second language, especially at an early age, affects overall intellectual growth and mental development. Studies have shown bilingual students perform better in school and tend to be effective problem solvers [source: Center for Applied Linguistics].

Furthermore, numerous studies show a positive correlation between learning a second language and college admissions test scores. According to data collected by the College Board, there is a positive correlation between the study of foreign languages and SAT scores. Not only do students who study a foreign language score higher than their counterparts who have not learned a second language, their SAT scores improved with each year of study. In other words, those students who took four years of a foreign language scored higher than those who stopped after two [source: College Board]. In addition, the data also show that students who studied multiple years of other subjects, such as science, had no significant increase in their SAT verbal scores [source: Weatherford].

Of course, admissions officers at most colleges and universities also look closely at the applicant's transcript. Here they not only see grades earned, but also the student's course load. And to some of these gatekeepers, students who go beyond the two-year language requirement and also take AP courses show they are serious about academics. Admissions officers recommend that students who are proficient in a second language, particularly those who hope to attend an elite college or to major or minor in a foreign language, take four years of the language, including an AP language course (if available) or sit for the SAT subject test in the language they have been studying.

Unfortunately, not all languages are tested by the College Board's SAT subject tests. The limited number of tests affects what languages students choose to study in high school, which may impact their course of study in college and ultimately their career. Take for example, a student who wishes to learn Russian in high school. Because there currently is no standardized admissions test for Russian, that student may be discouraged from studying this language and, eventually, countries like the United States, may find themselves with a dearth of Russian speakers as a result [source: Morgan]. You can find out which foreign language tests the College Board offers by visiting its Web site.

Although studying a second language may not be the specific factor that stands out on your college application, chances are it will make a difference on an application of a different kind. Let's look at how speaking more than one language can benefit your career.

What Do Admissions Staff Want?

According to a 2009 report from the National Association for College Admission Counseling (NACAC), the most important factors in admission decisions are grades in college preparatory courses, strength of curriculum, admission test scores (SAT, ACT) and overall grades. Small private colleges may go beyond and look at the essay/writing sample, interview, recommendations, work and extracurricular activities, subject test scores (AP, IB), portfolio and demonstrated interest.

Is a Second Language Good for Your Career?

Outside of college campuses, mobility and technology have quickly brought different cultures closer. People are more willing to move to different parts of the world, and companies are more apt to do business with people in countries that, until recently, were inaccessible. For example, a significant opportunity for business opened when China joined the World Trade Organization in 2001 [source: Kessler]. Of course, crossing time zones and cooperating with colleagues in other countries is more effective if you can speak a common language and, at the very least, understand cultural differences.

But you don't have to leave home to benefit from the ability to speak a second or third language, especially if you work in one of the following industries:

For the United States, the need for fluent speakers of foreign languages became even more apparent after Sept. 11, 2001, when the country's deficiency in this area affected national security, in terms of being able to translate information obtained by U.S. intelligence agencies. Learning a foreign language not only aids in communication, but understanding and appreciation of other cultures [source: Morris].

In addition, as people continue to immigrate to the United States, schools and businesses become a mix of languages and cultures. North Carolina, for example, is experiencing rapid growth of non-English speakers from Hispanic and Asian countries, thanks to the agriculture and financial industries. When it comes to doing business in the global marketplace, multilingual speakers, who have an understanding of other cultures, have an advantage [source: Morris].

Andrew, the student who was accepted to Georgetown and graduated from the university's School of Foreign Service, thinks that foreign languages pose an excellent way for applicants to distinguish themselves, especially if they study an "unusual" language.

"Knowing a language is half the battle. Demonstrating that you are a 'global citizen' is the other half," he says, regarding both college and job applications. "That's the factor I'd look for. Does the applicant just know the language, or have they also used it to travel, volunteer in their local community or to perform a job they couldn't perform without the second language?"

"The application of the language and the awareness that contact with speakers of other languages can bring far more to an applicant's depth than merely having learned a second language."

For more information on the college admissions process, explore the links on the next page.

Foreign Language in the U.S.A.

According to the 2000 U.S. Census, more than 80 percent of Americans speak English only, including President Barack Obama. Of the less than 20 percent who do speak a second language, Spanish is the most popular, followed by Chinese, French, German, Tagalog (a language from the Philippines), Vietnamese, Italian and a handful of others. Furthermore, there is a difference between fluency in a second language and taking a few classes in high school [source: Vistawide].