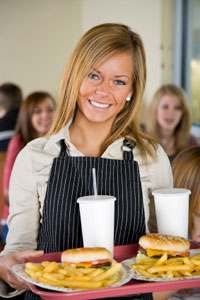 Federal law says that your server should be paid a base salary of no less than $2.13 an hour before tips.
©iStockphoto.com/LeggNet

The Federal Labor Standards Act (FLSA) goes into great detail about who qualifies for coverage under federal minimum wage law and who doesn't.

For example, all workers who produce goods or supply services that cross state lines qualify for minimum wage. Interestingly, the federal government has a very broad definition of what qualifies as interstate commerce.

The most common example of interstate commerce is a factory worker who produces goods that are shipped and sold to retailers in other states. But even the janitor who cleans up that factory qualifies as a participant in interstate commerce. Also, anyone who handles a credit card payment (a waiter, a sales clerk, a grocery store check-out person) is technically contributing to interstate commerce since the payment is electronically processed at a remote location [source: U.S. Department of Labor].

Any business that does more than $500,000 a year in sales (before taxes) needs to pay its employees at least minimum wage. The same is true for any business that supplies essential public services like hospitals, medical and nursing care, schools and government agencies.

Certain service industry workers are covered by minimum wage law, too, including day laborers, housekeepers, cooks, nannies, chauffeurs and more. To qualify for minimum wage in a service industry, you need to work at least eight hours a week for a single employer and earn at least $1,500 a year from that job.

A slightly different standard applies to workers who are younger than 20 years old. According to the FLSA, an employer can pay a youth worker as little as $4.25 an hour for the first 90 consecutive days of employment, after which the regular minimum wage applies.

Waiters and other "tipped" professions fall into a special category if they receive at least $30 a month in tips. Employers must pay tipped employees a base salary of no lower than $2.13 an hour. After tips are added in, however, no employee can make less than the standard minimum wage. So if tips are low, the base hourly wage must be higher to make up the difference.

In the next section, we'll look at some minimum wage laws from around the world.