Requirements for Cashing in Savings Bonds 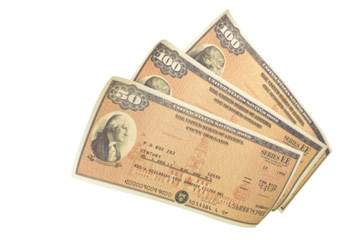 Could you imagine owning savings bonds and being unable to cash them in? Make sure you have the proper documentation before you head to the bank.
Comstock/Getty images

When it's time to cash in your savings bonds, you'll find the process relatively simple as long as you have the proper documentation. Remember that savings bonds can't be sold, traded or given away. The person whose name is on the bond is the only person who can cash it in (with some exception, which we'll get to shortly).

First, you obviously need the bond itself (if it's an electronic bond, there's really no process at all. You cash it in via the Treasury Web site, and the funds are deposited into your bank account). Make sure the bond is eligible to be cashed, though: It has to have been at least a year since it was issued (some bonds only require a six-month retention period).

Take your bond to your bank -- but not just any bank. It has to be one where you've had an account for at least six months. If that isn't possible, you can establish your identity using a government issued form of photo ID. A driver's license is most common. If you're using documentation like a driver's license to establish your identity, you'll be limited to cashing $1,000 worth of savings bonds. You'll then need to sign a request for payment form in front of a bank official, then confirm your social security number and current address.

A parent or guardian of a child who is the bearer of a savings bond can redeem the bond, as long as the child is too young to sign his or her name.

There are circumstances under which a bank can refuse to issue payment for a bond, or in fact may be legally unable to do so. In these cases, the bearer may have to visit a Federal Reserve Bank Savings Bond Processing Site to redeem the bond. You can find the locations of these sites at the Treasury Department's TreasuryDirect Web site.