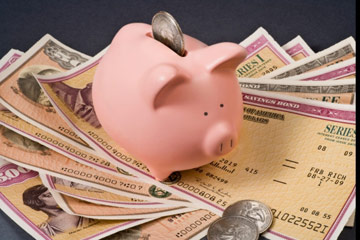 Savings bonds are great investment tools, but cashing them in can be a little difficult. See more investing pictures.
Peter Gridley/Getty Images

Savings bonds are government-issued securities that accrue interest and increase in value over the length of the term, which can range from one year to 20 years. They aren't marketable -- that is, the original purchaser of a U.S. savings bond can't ever sell it to someone else, and no one except the original purchaser can ever cash in the bond (with a few exceptions). This differs from a Treasury bond, which is more akin to buying stock in the government; unlike savings bonds, they can be bought and sold on financial markets.

The first savings bonds were issued during World War I as a way to finance the U.S.'s involvement in the war [source: TreasuryDirect Kids]. At the time, they were known as Liberty Bonds, and savings bonds are still sometimes referred to as such.

The value of a savings bond depends on the types of bond it is, what form it's purchased in and when it was purchased. The most common are series EE (series E bonds are the same as series EE, but much older, so few of them remain and are no longer issued). A paper EE bond is purchased at half face value (i.e. $25 for a $50 bond). If purchased before 2005, they earn a variable interest rate based on the average five-year Treasury yield, recalculated every six months. Series EE paper bonds purchased after May 2005 pay a fixed interest rate. They mature after 20 years, at which point they can be redeemed for the face value (plus interest). They can be redeemed as soon as one year after they're issued, but if redeemed within five years of issuing, the bearer will forfeit three months of interest.

Series I bonds are similar, but have a more complicated interest calculation. Other bond series, such as HH, pay out regular interest payments over the term of the bond, then are redeemed at face value [source: U.S. Department of the Treasury].

If you have some savings bonds and you're thinking of cashing them in, this article will explain how, and how to figure out how much they're currently worth.