How much can you save by turning off the A/C?

Browse the article How much can you save by turning off the A/C? 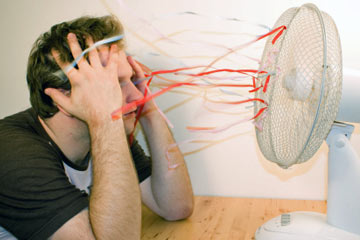 Let's assume you could save $220 per year just by turning off your A/C. But if you live in a particularly hot and humid climate, is it worth it?
©iStockphoto.com/Tomas Skopal

Ever-rising energy costs and a growing awareness of environmental issues have inspired many of us to strive for "greener" living. From trading in our SUVs to replacing our incandescent light bulbs with compact fluorescents, we as consumers are taking important steps to reduce both our fuel bills and our carbon footprints.

Of course, whether your primary motives are financial or ecological, some luxuries and modern conveniences are harder to relinquish than others. Changing a bulb is fairly painless, and driving to work in a compact car offers a tangible reward every time you fill up its much smaller tank at the gas pump. But if you live anyplace where summer temperatures exceed 90 degrees Fahrenheit (32 degrees Celsius) for more than a day or two, you'd probably sooner give up the clothes on your back than turn off your air conditioning.

On some level, we all understand that running the A/C has an impact on our electric bills. How many parents have yelled "Close the door! The air conditioning is on!" before the kids are even halfway outside? But just how much do we spend to cool our homes?

Air conditioning costs vary greatly depending on the age and efficiency of the HVAC system and the size and location of the home, but a 2005 report by the U.S. Department of Energy's Energy Information Administration found that air conditioning accounted for 16 percent of all household electricity consumption in the United States [source: Energy Information Administration]. And if you live in a particularly hot climate, A/C can account for 60 to 70 percent of your electric bill in the summer months [source: Austin Energy].

So what's a sweaty, frugal-minded and environmentally conscious citizen to do? Before you decide that your A/C is off-limits, remember that it doesn't have to be an all-or-nothing proposition. Read on to find out how much you can save by turning off the A/C -- or even setting the thermostat a few degrees higher.

Running the A/C consumes more than 2,000 kilowatt-hours (kWh) of electricity per year in the average air conditioned home [source: Energy Savers]. At a rate of 11 cents per kWh, that works out to an annual cost of more than $220. Your actual cost per kilowatt-hour may be higher or lower, and your energy consumption may be greater or smaller depending on the size and location of your house, but using the averages, let's assume that you could save $220 per year just by turning off the A/C. Is it worth it? If you live in the Deep South, chances are your response is a resounding, "Heck, no!" But if you multiply the energy used to cool your home by the millions of households cranking up their central air on the hottest day in August, you may be inspired to look for ways to cut back on cooling without turning off the A/C all together.

For most of us, extreme heat is merely a source of discomfort, but it can also be a very real danger, particularly for children and the elderly. Heat waves account for an average of 700 deaths each year in the United States, more than hurricanes, tornadoes, floods and earthquakes combined [source: Centers for Disease Control and Prevention]. That number is expected to grow to as many as 5,000 per year over the next several decades as climate change brings a rise in average temperatures [source: Centers for Disease Control and Prevention]. So how can we protect ourselves from the heat without pumping more carbon emissions into the atmosphere and making the problem even worse?

A programmable thermostat, which costs anywhere between $40 and $100, can save you an average of $180 every year in cooling and heating costs by automatically adjusting temperature settings during times when you're regularly out of the house, such as for work or school [source: Energy Star]. And if your air conditioning unit is more than 10 years old, replacing it with a more efficient Energy Star qualified model can save you as much as 20 to 40 percent on your cooling costs [source: Energy Savers].

If a new air conditioner is not in your current budget, be sure to maintain the system you have. Change the air filter every month during the summer, and be sure the outdoor unit is clear of weeds, shrubs and any other overgrowth or obstruction.

What if you're determined to cut out cooling costs or you don't have air conditioning at all? On the next page, we'll look at some ways to stay cool without A/C.

If you've ever lived in an older home, you know that people somehow survived without air conditioning. Aside from the fact that their summers may have been a little cooler, our grandparents also knew some tricks for keeping cool that we seem to have forgotten. It might seem counterintuitive to close the windows on a sweltering summer day, but if you open them at night when the air is cooler, closing them in the morning will help to keep the cool air in and the hot air out in the midday heat. Close blinds and curtains on the south- and west-facing sides of the house to shade your rooms, and put up awnings and umbrellas over sunny decks and patios. Turn off anything you aren't using, including light bulbs, TVs, computers and gaming systems, since these appliances generate additional heat.

The U.S. Department of Energy estimates that the average household could save between $100 and $250 per year with just three strategically placed shade trees [source: Department of Energy]. And while you're waiting for your trees to grow, even shrubs and grasses planted next to the house will help to prevent heat gain by shading the lower portions of your walls [source: Walker].

Ceiling fans and window fans don't actually cool the air, but they do make you feel cooler by blowing air over you [source: Energy Star]. A ceiling fan runs on just 75 watts of power, as compared with the 3,500 watts needed to run an average central air conditioning unit [source: Bluejay]. Just be sure the fan is pushing air downward, not up (most are reversible), and be sure to turn it off when you leave the room, since fans only cool people, not spaces [source: Energy Star].

If you live in a humid climate, you know that the humidity is often what makes summer heat feel so unbearable. A typical dehumidifier uses about 785 watts of electricity and can make your living space feel comfortable for less than it costs you to run your central air [source: Energy Savers]. Energy Star rates dehumidifiers based on the liters of water removed from the air per kWh of energy consumed, making it easy to compare efficiency from one unit to the next.

Even if you do have air conditioning, the tips above can help you cut down on the amount of work your A/C unit needs to do. Just remember that reducing your energy consumption by even a little bit helps both your wallet and the environment, and rest assured that cutting back on your cooling costs doesn't have to mean suffering all summer long without A/C.

The answer: It depends. Both cranking the A/C and rolling down the windows can decrease your fuel efficiency by as much as 20 percent, but on a 90 degree Fahrenheit day, it's neither comfortable nor advisable to ride along with the windows up and the A/C off. Your best bet: Roll the windows down if you're traveling less than 40 miles per hour, but roll them up and turn on the A/C if you're moving any faster than that [sources: Neiger; Department of Energy].