How much can you save by unplugging appliances? 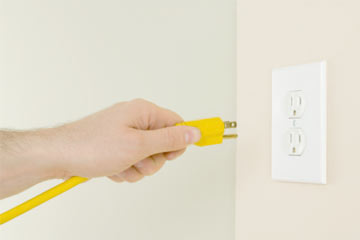 The average home contains 40 idle products constantly drawing power and together these devices may account for as much as 10 percent of household energy use.
Jupiterimages/Getty Images

Want to stump your roommates, spouse or kids? Ask them to guess how many electric gadgets or appliances are plugged in throughout your home right now. It's an interesting exercise, and if you break it down room by room, you can probably come up with a pretty decent estimate.

There are the refrigerator, coffeemaker, dishwasher, stove, microwave, toaster and cordless phone in the kitchen; then you have the TV, DVD player, cable or satellite box, DVR, gaming console, lamps, and stereo equipment or iPod docking station in the family room; not to mention the computer, printer, cable modem, wireless router, and various phone and mobile device chargers in the office or study. And don't forget the all of the other things in the bedrooms, bathrooms, laundry room, garage and basement.

Even when we power down for the night, we hear the constant hum of the fridge and the click of the HVAC kicking in. After turning off the bedside lamp, we glance one last time at the glowing display on the clock radio to make sure the alarm is appropriately set. It's only when a power outage throws us into sudden pitch-black silence that we understand just how quiet and dark it isn't most of the time.

Until recently, most of us assumed that we were doing our part to save electricity by setting the A/C a few degrees warmer or remembering to turn off the light switch whenever we left a room. But even as we make the effort to lower our electric bills and reduce our carbon footprints by investing in compact fluorescent light bulbs (CFLs) and other energy-saving products, we're being warned about phantom power and the hidden energy costs of all those appliances we thought we turned off.

Just how much power do our gadgets consume when we aren't even using them? And how much money can you really expect to save by unplugging appliances? Let's take a look.

What is phantom power?

Also called phantom energy, phantom load, standby power, idle current and vampire power, phantom power is the energy used by appliances and electronics when they are turned off but still plugged in to a power outlet [source: Energy Star]. According to the Lawrence Berkeley National Laboratory (LBL), the average home contains 40 products constantly drawing power. Individually, the electricity flowing to a TV that's been turned off or a coffeemaker programmed to brew in the morning is extremely small, but together, these sleeping devices may account for as much as 10 percent of household energy use [source: Lawrence Berkeley National Laboratory].

That percentage has actually grown since 1996, when researchers from LBL and Davis Energy Group attributed just 5 percent of residential energy consumption to so-called "leaking electricity" [source: Meier]. Why the increase in wasted electricity when we're supposedly getting smarter about energy conservation? It makes sense when you think about the kinds of devices that consume the most phantom power.

Generally speaking, the biggest phantom power consumers include any device with a remote control (such as a TV, DVD player or garage door opener); an external power supply (that clunky black box known as a "wall wart" on the plug for your router, printer or cable modem); a charger (for a mobile phone, tablet PC, laptop, GPS or handheld gaming device); or a continuous display (an alarm clock, oven, microwave, VCR or coffeemaker with a digital clock). Laptop computers and cable boxes (particularly cable boxes with integrated DVRs) are among the worst phantom power offenders, drawing an average of 9 watts and 44 watts in "off" mode, respectively [source: Lawrence Berkeley National Laboratory].

Older appliances such as ovens without digital clocks, and washers and dryers with manual dials instead of brightly lit consoles, are less likely to draw phantom power simply because they aren't expected to do anything in standby mode: They're either on or they're off. The tradeoff is that these older appliances are much less energy efficient when they're running.

Of course, you can't always predict the phantom energy consumption of an appliance just by looking. Some devices that appear dark and cold might actually be drawing a current, and many newer TVs and electronics draw less than 1 watt when they're turned off, thanks to recent manufacturer efforts to comply with Energy Star guidelines [source: Energy Star].

An inexpensive power meter such as the Kill-A-Watt electric usage monitor can help you figure out which of your appliances are sucking up the most juice when they should really be sound asleep, but do the savings you hope to gain by unplugging your gadgets offset the $25 cost of a usage monitor? Read on to find out.

People often get confused about the difference between watts (W), watt-hours (Wh) and kilowatt-hours (kWh). A watt is a unit of power (1 horsepower = 746 watts), whereas watt-hours tell you how much energy is used over a period of time. For example, a 100-watt light bulb uses twice as much power at any given moment as a 50-watt bulb. To find out how much electricity that light bulb consumes, you need to know how long it's left on (watts x hours, expressed in watt-hours). To get kilowatt-hours, simply divide watt-hours by 1,000 [sources: Bluejay; Newton].

When to Pull the Plug

So at 13 watts, the VCR consumes about 114 kWh per year. Assuming an electricity cost of 11 cents per kWh (your actual cost may be higher or lower, depending on your provider), the cost to power the VCR comes to about $12.53 per year, or just over $1 per month. When you think of it in those terms, it doesn't seem like much. But consider that you may have as many as 20 or 30 other appliances using phantom power as well, and you can see how the numbers begin to add up.

According to the Energy Star Web site, the average U.S. household spends more than $100 each year to power devices that are turned off. Nationally, phantom power accounts for more than 100 billion kWh and more than $10 billion in energy costs each year. Now when you think of leaving that VCR plugged in all this time just to display a blinking "12:00" on its digital clock, you probably want to kick yourself.

One of the easiest ways to reduce phantom power consumption is to plug appliances like the basement TV and VCR into a power strip, then turn the power strip off when the devices are not in use. Some power strips even let you designate a "master" device (such as a computer), then automatically turn off power to peripheral devices (such as a printer, scanner or speakers) when the main component is not in use.

Using a power strip also eliminates the need to repeatedly unplug appliances from the wall, reducing the danger of frayed cords and wires. Most power strips use no electricity at all when they are switched off, cutting vampire power consumption to zero for any appliances plugged into them. If you're worried about cutting power to your computer and other electronics, you needn't be; just be sure to follow the recommended shutdown process when you turn them off, then enjoy the energy savings when you turn off that power strip [sources: U.S. Department of Energy].

Of course, there are some appliances that you simply can't unplug every day. A refrigerator is probably the most obvious, but clock radios and programmable coffeemakers also become pretty useless if you have to reset them every time you turn them on. DVRs need to be left on in order to record shows, and cable boxes often take a long time to reboot once they are unplugged. When you shop for items like these, compare Energy Star ratings for standby power before you buy, and get the most efficient models you can afford.

The bottom line? Unplugging your appliances probably won't leave you noticeably richer, but it's a relatively easy way to save 5 to 10 percent on your electric bill. And if you can convince your friends and neighbors to eliminate phantom power, too, the cumulative effect could be truly impressive.

How to Apply for a Homestead Exemption
These Folks Retired in their 30s and 40s: Can You Do It Too?
How to Shop for Mattresses